I suspect there are things that have been going on behind the scenes that explains why Alyssa would go to such lengths to attack me when I have not been involved in following her story for some time.

Maybe it’s connected to Kent Hovind and his tendency to have others do his dirty work or something going on between Alyssa and her ex-husband.

If I learn more I will update the article here.

Alyssa’s attacks on me begin around the 11:25 mark in the video indicated by the time marked link below:

(Video has been removed.)

.
You know Robert Baty is a guy out there.
This guy is a twisted individual, my lord.
I can’t imagine a more kooky person.
.
This guy’s so kooky he stalks Hovind to death.
.
I swear this guy wakes up every day just to figure out what Hovind is doing.
.
When you wake up every day just to find out what somebody is doing that’s called stalking, and Robert Baty is the perfect definition of a stalker and the question that comes to my mind is why hasn’t Kent Hovind filed for a restraining order against this guy.
.
This guy has all sorts of stuff on line about Hovind.
.
He’s put stuff on line about me, oddly enough, which is so incredibly crazy.
.
It just shows the guy is a hypocrite like most atheists.
.
They’re hypocrites. They’re just ignorant hypocrites.
.
They’ll come down on you for stuff and they do 10 times worse than you do and you know that’s what this guy does.
.
He’s perma-linked to all sorts of crap to my name. You know, this guy is nothing but a stalker.
.
I’m close to getting a restraining order so I don’t know why Kent Hovind hasn’t gotten a restraining order on this guy. His slander and, you know, his constant attacks just show what a stalker the guy is.
.
Day after day after day he harasses Hovind. He harasses me. He harasses anybody associated with Hovind.
.
You know, Hovind isn’t perfect. There’s no perfect Christian on this Earth. You know, all Christians have their flaws. I have flaws. Hovind has flaws. That doesn’t mean they’re not, you know, an incredible person. My husband has flaws, but he’s an incredible person because of Jesus and because of what Jesus has done in his life.
.
….
.
Robert Baty won’t post anything about my ex and the things he did to me, but he’ll try to pick out, you know, any flaw, anything he thinks that I did wrong and, you know, post that all over the Internet, but he certainly won’t, you know, go through anything that anybody else has done who’s a non-Christian. So, it shows he’s just persecuting me for my faith, and, you know, this guy needs to be stopped.
.
He’s nothing but a stalker, and he needs to get a life, you know, get eternal life, accept Jesus and, you know, and start living for something that matters.
.
That’s the real issue with these atheists; they live for nothing. They don’t have any point to their lives, so they sit there and belittle Christians.
.
….
.
And again, I am going to say this. You know, if you wake up every day just to find out what someone else is doing you’re a stalker, and, you know, there is a remedy for that called a court order, a personal protection order.
.
So, you know, that can be put in place, and I don’t know why Kent Hovind hasn’t gotten a personal protection order against on Robert Baty yet who stalks him day and night.
.
It just doesn’t make sense of why, but apparently he hasn’t yet, but I think it’d be a great idea. The guy attacks Kent Hovind day after day and attacks anybody who has anything to do with Hovind.
.
– Alyssa Carone – December 1, 2016 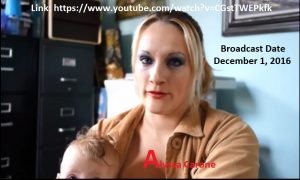 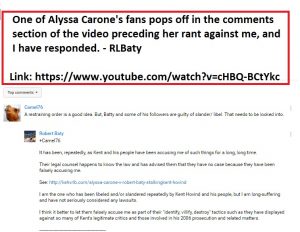 A restraining order is a good idea. But, Batty and some of his followers are guilty of slander/ libel. That needs to be looked into.

It has been, repeatedly, as Kent and his people have been accusing me of such things for a long, long time.

Their legal counsel happens to know the law and has advised them that they have no case because they have been falsely accusing me.

I am the one who has been libeled and/or slandered repeatedly by Kent Hovind and his people, but I am long-suffering and have not seriously considered any lawsuits.

I think it better to let them falsely accuse me as part of their “identify, villify, destroy” tactics such as they have displayed against so many of Kent’s legitimate critics and those involved in his 2006 prosecution and related matters. 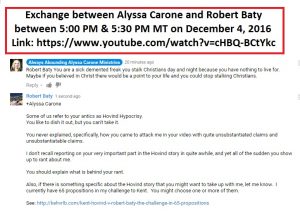 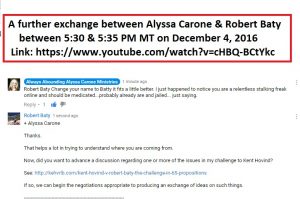 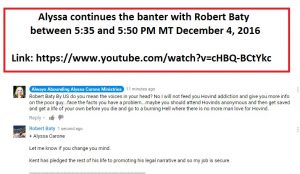 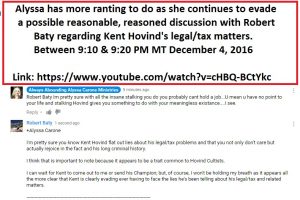 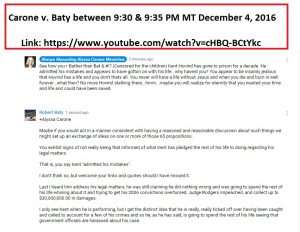 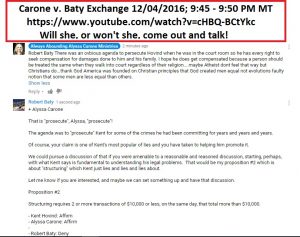 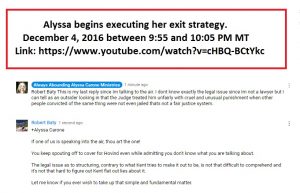 The first line of my response above is: “If one of us is speaking into the air, thou art the one”.

That should have been: “If one of us is speaking into the air, I am the one.”

Alyssa, for some reason, has returned to continue her rants about me. Her relevant commentary starts about the 10:00 mark and she actually begins talking about me around the 11:30 mark.

I also just noticed that Alyssa has removed her earlier video attacking me for stalking and referenced at the top of this article.  Glad I was able to copy her words as noted above before they went “poof”. 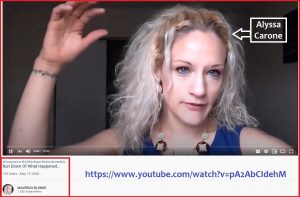 Jesus take the wheel: A militant Christian with a YouTube account brings salvation (and possibly the coronavirus) to Hamtramck

Looks like Alyssa has scrubbed her YouTube channel of all videos after April 17, 2020; or at least made them “private”.

Link to her videos:

Just ran across someone else who has given Alyssa Carone some attention via his YouTube channel: