What Really Happened To Sarrah in Conecuh County, AL? 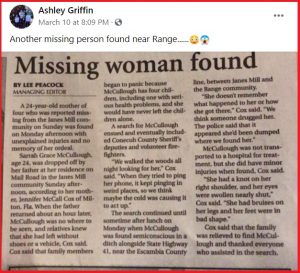 A 24-year-old mother of four who was reported missing from the Janes Mill community on Sunday (March 7, 2021) was found on Monday afternoon with unexplained injuries and no memory of her ordeal.

SARRAH GRACE MCCULLOUGH, age 24, was dropped off by her father (RICHARD COX???) at her residence on Mail Road in the Janes Mill community Sunday afternoon, according to her mother, JENNIFER MCCALL COX of Milton, FL.  When the father returned about an hour later, McCullough was no where to be seen, and relatives knew that she had left without shoes or a vehicle, Cox said.  Cox said that family members began to panic because McCullough has four children, one with serious health problems, and she would have never left the children alone.

“We walked the woods all night looking for her,” Cox said.  “When they tried to ping her phone, it kept pinging in weird places, so we think maybe the cold was causing it to act up.”

The search continued until sometime after lunch on Monday when McCullough was found semiconcious in a ditch alongside State Highway 41, near the Escambia County line, between the Janes Community and Range community.

“She doesn’t remember what happened to her or how she got there,” Cox said.  “We think someone drugged her.  The police said it appeared she’d been dumped where we found her.”

McCullough was not transported to a hospital for treatment, but she did have minor injuries when found, Cox said.

“She had a knot on her right shoulder, and her eyes were swollen nearly shut,” Cox said.  “She had bruises on her legs and her feet were in bad shape.”

Cox said that the family was relieved to find McCullough and thanked everyone who assisted in the search. 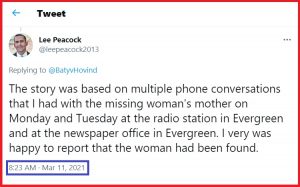 Since the incident was first mentioned on Social Media and The Evergreen Courant published its story under the by-line of Lee Peacock, Managing Editor, Sarrah Grace McCullough, her mother Jennifer McCall Cox, and her sister Samantha Danyale Nichols have been complaining that the reports are not accurate while refusing to offer any meaningful explanation or details as to what they might claim happened in the alternative.

Sarrah, Jennifer and Samantha have been quite critical of those on Social Media who dared to consider the story and make inquiry and offer opinions.  I, Robert Baty, have been a special target of their criticism/condemnation.

Maybe we will hear more of these things.

Following will be some examples of what has transpired via social media. 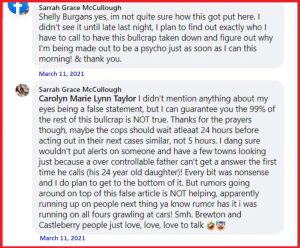 (Above posts may have since been removed by Sarrah!)

Jennifer, Sarrah’s mother, contacted me privately through FaceBook Messenger, and we had the following exchange: 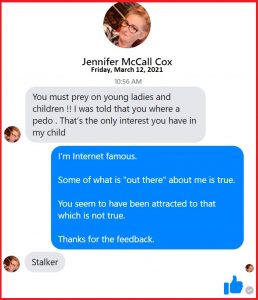 Some social media postings indicate Sarrah only recently moved to Conecuh County, AL, and that she got married in February of 2021.  It is also indicated that Child Protective Services is involved with Sarrah and her children.  Details are unknown.  Her alleged husband appears to have conspicuously quiet in all of this, as has Sarrah’s dad. 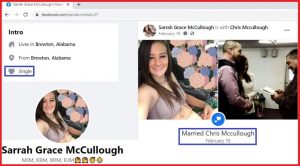 More of the postings to Ashley Griffin’s thread at: 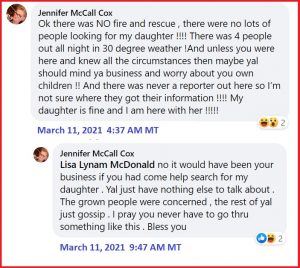 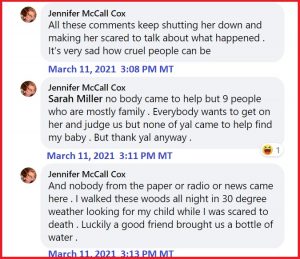 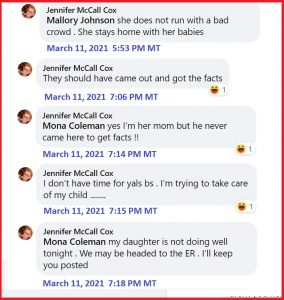 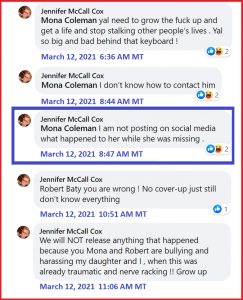 After some exchanges with Samantha Danyale Nichols, Sarrah’s sister, in my FaceBook group, Samantha contacted me via FaceBook Messenger and we had the exchange noted below: 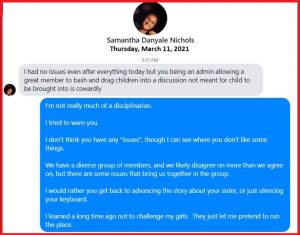 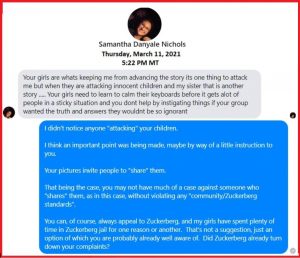 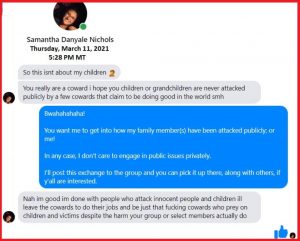 Link to one thread in my FaceBook group where Samantha Danyale Nichols participated:

Here is a post from Ashley Griffin from her thread on the subject at:

In that same thread are these 2 posts from Lisa Lynam McDonald: 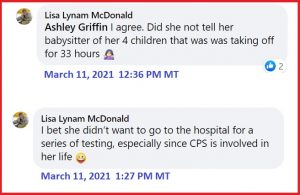 A couple of more screenshots from that same thread: 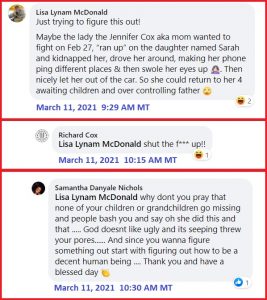 The above may be the only thing Richard Cox posted on the matter! 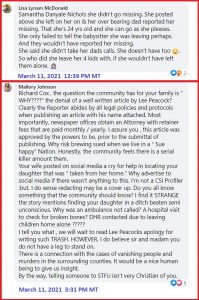