On April 29, 2018, Peter J. Reilly posted a blog entry addressing, in substantive part, Kent Hovind’s false legal narrative, but he also addressed a number of other matters.  The link to that blog post is:

This article is designed to address the comments about me attributed by Peter to Ernie Land, Kent’s handler regarding Kent’s nominee, alter-ego corporate operations and Dinosaur Adventure Land near Lenox, AL.

to a level of using the information we put up to

make every effort to vilify Kent by making unwanted

Kent and his speaking engagements.

Even after he is informed his communications are

unsolicited and unwanted he continues to troll them

and their sites or posts making undesirable comments.

In addition his trolls follow suit by making unwanted

These trolls are pure evil.

The Churches are complaining to us.”

That’s typical of the cowardly accusations that I have faced from Kent Hovind and his people for years.  They dare not face me and deal openly and honestly with their cryptic, unsubstantiated claims.

This article again presents the invitation, the challenge, to Kent Hovind to face me, keyboard to keyboard, and deal with these latest accusations made by his man Ernie Land.

In my most recent exchange with Ernie Land, he whined about me not quoting him about my accusation, so I quoted him and asked he do the same, and he showed himself not only the coward but the hypocrite.  That’s been typical of Ernie who pops off once in awhile and then runs off, often times leaving his “go to hell” message behind.

Kent and I have much to talk about, and this is just one of many issues we might now take up, if Kent will step up, quit hiding out, and face me, keyboard to keyboard, or officially designate a representative to do so on his behalf.

Where’s the documentation as to what Kent’s man Ernie is talking about regarding me?

What churches are complaining about me?

My outstanding challenge to Kent Hovind currently includes 68 propositions which are listed in the article on this website at the following link:

As far as my part in ministering to churches and others whom I have contacted regarding Kent’s false legal narrative and his unrepentant criminal history, and related matters, I offer the following testimonials and links to other articles dealing with my contacts with those who have sponsored Kent Hovind performances:

“I can ‘on the record’ state that your contact with

me has not been one of harassment but of sharing

“It seems to me that Robert Baty has been quite the

Ernie Land should be glad that Baty is a man, and

not a woman.
.
A few years back, a very nice woman who had been

a life long member of IFB churches got angry about

the number of pastors and youth ministers who had

had covered for. So she documented more than a

hundred of these cases, and whenever one of them

moved to another town, she sent the police department

and the churches, her documented case files. I suppose

those men were feeling a bit harassed, because they had

to find another line of employment, other than preying

on Christians who did not know their background. Then

she joined forces with another woman who was doing the

same with the Southern Baptist Churches. The reason I

found out about the good deeds of these women is that

pastored a church I attended.”

Articles Relating to Kent’s Performances in 2017 in Boise City, OK:

One should also consider the broader context in which Ernie’s cowardly accusations have been sent my way.  Kent and his people have a long history of engaging, on-line, in the “politics of personal destruction” regarding anyone involved in Kent’s criminal prosecutions and critics like me.

They are liars, cowards, and hypocrites, among other things.

I am, however, long-suffering and continue to invite Kent Hovind to come out of hiding and face me, keyboard to keyboard.  We have a lot to talk about (see 68 propositions in my outstanding challenge referenced above).

Related Screenshots in Support of Quotes 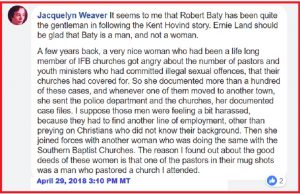 George Dorn has now added the following comments to my Hovind FaceBook page:

Mr. Land (and dr. Kent) are still talking out of their

rebuttal of every argument Kent raised, he and Ernie

renounce a single one of his detax opinions.

and supporters deserve to hear the truth directly from

their leader’s mouth. But they will never hear it from Kent

because they are still willing to give Kent cash without

To the extent that any religion encourages it’s adherents

to be better human beings I support it.

That said the religious impulse has long been proven to

be the most efficient way for charismatic leaders to steal

money from their followers. 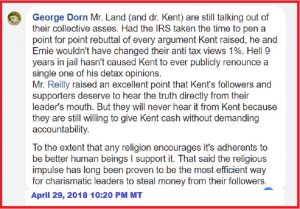