I (Robert Baty) ran across Christina Cruise in a FaceBook group today where the discussion centered on a Tennessee lawyer by the name of Connie Reguli and how she is associated with anti-government, anti-CPS efforts that include certain promoters of frivolous positions that, effectively, exploit a very vulnerable population within our society. 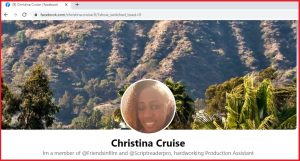 Link to Christina’s summary of her efforts: 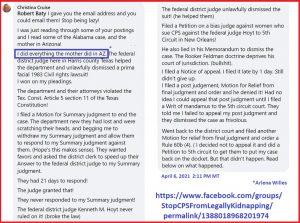 As indicated above, Christina indicated that she did everything Arlena Willes did.  Arlena is another anti-CPS case I have covered to some extent and which I have an article on at:

Arlena lost custody of her child and awaits a trial in May of 2021 regarding criminal charges filed against her for the abuse/neglect her child suffered.  The child is now in the custody of his biological father and is doing much better from all indications.

Despite admitting to her losses in court, Christina still seems to be of the opinion that she had legal positions that should have allowed her to prevail had the courts reached the merits of her claims.

I don’t recall seeing Christina admit to who was actually helping her with her voluminous pro se filings, but she has admitted to being “high” on some guy named “David” who has a website promoting frivolous claims regarding child custody issues at: 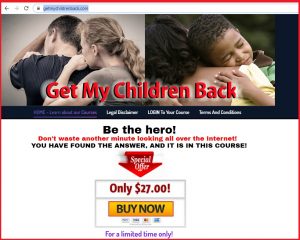 The Case Against the Judges

The Dismissal WITH Prejudice

The Case Against CPS

The Complaint – Part I

The Dismissal WITH Prejudice

Christina filed appeals but all were lost without the appeals court(s) ever reaching the merits of her complaints (which should not be considered any indication whether or not the merits had any merit).

In reference to this article and my presentation above, Christina Cruise posted the following note:

(Scroll down the above linked thread to find Christina’s post below.) 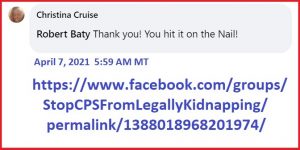 Robert Baty Thank you! You hit it on the Nail!

They Never reached the merits on the case and just dismissed my case without a hearing, a 14th Amendment due process violation. They should have giving me some kind of hearing.

The defendants never responded to my Summary judgment.

I forgot to mention to that 5th circuit court ruled in the Joni Faith Saloom case another mother that sued CPS. (I’ve tried hunting her down but cant find her). I used her case in my 1983 Civil Rights Petition. The federal district judge threw her out of his court and dismissed her case on the Rooker Feldman Doctrine saying that she tried to claim her son while in federal court.

You cant get your children back through federal court. You can only seek damages and sue for Civil rights violations.

5th circuit came back with an opinion saying that you can’t regain custody in federal court. But….the mother alleged that the state actors violated her constitutional rights and the Rooker Feldman doctrine doesn’t Bar her from suing. They reversed and Remanded the case and put her case back on the Judges Hoyt docket.

So the Cruise case comes along and this same judge does the same thing and ignore the ruling of 5th circuit that he clearly knows about. He dismisses the case again on the same thing, The Rooker Feldman doctrine, (lol).

It’s just a fucking doctrine. It has no legal basis to stop a civil rights lawsuit. Federal District judge Kenneth M. Hoyt is bias and prejudice against anyone who Sue’s CPS.

Federal district judge Janis Graham Jack in Corpus Christi would have handled these clowns and Stuck it to CPS where it hurts.

I should ask for a change of Venue and file another suit.

They left me in the hands of a cold hearted federal judge whose bias and prejudice.

Noticeably absent is still any admission as to who, specifically, she was following in prosecuting her federal cases or who is behind the “Get My Children Back” website she has recommended.