This website now has numerous articles reporting on the child custody case involving C. Clarke & Danielle Holm and their child that was born on October 10, 2016 in Cleburne County, AL.

Coverage here began after Ernie Land, Kent Hovind’s handler, reported that Kent’s man Brady Byrum had been secretly assisting the Holm parents in promoting “sovereign citizen” legal theories so as to insure the child would not be returned to them.

The Holms have kept up their sovereign citizen tactics for over 9 months.

They recently left Alabama and pledged to never return, abandoning their child to State custody and eventually a permanent placement with a qualified caregiver/adoptive parent.

Today, July 18, 2017, one of the Holms’ primary publicists, Susan Cobb, announced that the parents were leaving FaceBook.

Maybe they will be back.  Maybe not.

I would have preferred the Holm parents come out and face me and deal with their problems in promoting a false narrative regarding the legal and factual basis for why the State took and retained custody of the baby; or send me their champion.

They steadfastly refused, though lesser lights would on occasion try to justify the parents’ refusal to act in good faith to try and justify the return of the child.

I tend to think the parents didn’t really want to be parents and knew that they were not going to be able to convince the State to release the child based on their being competent and willing to properly parent the child.

They said they cannot condone it anymore.

They find all of the attempts against them childish and they are focusing their efforts on doing what they have to do for their son, and fighting is not the answer. Love is the only way.

They have too much to do and if they (their many adversaries) will just continue to try and set them up in something they are not involved in they believe it is time to rise above it and focus on the Creator and the mission at hand.

They will no longer be on line.

These were Christian and Danielle’s words to me just now and I told them I would make this post. 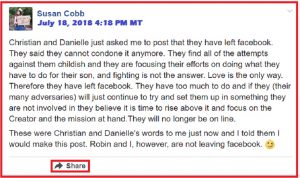