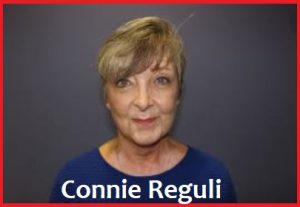 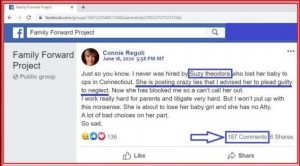 In the continuing drama that is the Suzy Theodoro story, it appears Suzy may have just found out about Connie’s post above which was in response to earlier claims Suzy had made about her relationship with Connie and such advice as Connie may have given her.  And Suzy has gone ballistic!  She has posted a lengthy narrative to her personal FaceBook page along with over 35 screenshots of her private communications with Connie and other FaceBook postings.

Attention: Please do not tag CONNIE REGULI on this post or tell us to ask her for help! She has been blocked from this page due to harassment!

Anyone telling us to contact Connie Reguli for help with our newborn in TN, please know this:

Connie Reguli has ONE agenda and that is HER OWN!

She has made it very clear to us many times in the past that she is not going to help us because we do not have the thousands of dollars to pay her like she wanted!

She is not the great wonderful warrior for families that everyone seems to think she is. I don’t think she is a warrior for anyone but herself. All the pictures and videos she posts of her “helping families get their kids back” are nothing more than a plea for attention.

She is addicted to glory and fame and money and that’s it. If you don’t have thousands of dollars to pay her, she will NOT help you.

She also lived in CT for many years and is apparently close personal friends with some of the people in CT who are currently persecuting us.

She at one point told us so! Her friend Lisa Vincent who she made us pay $100 consult fee to, did nothing but tell us to plead guilty to a crime we did not commit, and verbally abuse us!

She then proceeded to tell us that it “wouldn’t affect US at all in TN to plead “no contest” to child neglect and that all it really meant was that our daughter “had been neglected, and not necessarily that WE had done it!” LIKE SERIOUSLY!!??

DID SHE REALLY EXPECT US TO BELIEVE THAT?

(Specifically the statute they were trying to have us plead guilty to was was called “at risk of harm to minor child“ FOR DRIVING OUT OF STATE WHILE PREGNANT WHICH IS NOT A CRIME! They never told us this but it is actually A CLASS C FELONY which carries a prison term of like 20 years!

So after we had signed the agreement and transferred our case to TN, they were planning to have us arrested and arraigned in CRIMINAL COURT in TN, then have our children taken from us in CPS court in TN AND ADOPTED OUT, and then BECAUSE WE HAD PLED GUILTY, THERE WOULD HAVE BEEN NO ONE BUT NO ONE WHO COULD HAVE HELPED US GET OUT OF IT BECAUSE ONCE YOU PLEAD GUILY, THERE IS NO WAY TO APPEAL! THIS IS THE SAME LIGHTER PLEA DEAL THEY GAVE TO A GAY FOSTER ADOPTIVE COUPLE IN CT FOR ADOPTING SEVERAL FOSTER CHILDREN AND THEN SEXUALLY ABUSING AND RAPING THEM FOR YEARS! THISE PEOPLE ACTUALLY WERE CRIMINALS! ALL WE DID WAS DRIVE THROUGH THE CORRUPT STATE OF CT WHILE PREGNANT, STOP AT MIDDLESEX HOSPITAL FOR BACK PAIN, AND GET ACCUSED OF BEING MUSLIM TERRORISTS WHEN IT WAS NEVER TRUE! AT THAT POINT THEY HELD US AGAINST OUR WILL, FORCED ME INTO A REPEAT C-SECTION THAT WASNT MEDICALLY NECESSARY BECAUSE I WAS NOT IN LABOR AND THEN TOOK OUR DAUGHTER AND GAVE HER TO THE COURT CLERK FOSTER MOM TO ADOPT WHO WAS ALSO THE JUDGES NEICE! WE HAVE NEVER NEGLECTED OR ABUSED ANY OF OUR CHILDREN AND CONNIE REGULI AND LISA VINCENT BOTH TRIED TO HELP THESE VICIOUS DOMESTIC TERRORISTS HAVE US THROWN IN PRISON!

Even the DCS worker in TN told us that she didn’t know how to advise us on what to do because she had never been on a case before where they were trying to have “neglect charges drawn up on the parents!”

Now I am BEING TOLD BY SEVERAL OF HER OLD CLIENTS THAT SHES SCREWED OVER, that Lisa Vincent is now a DCF PROSECUTOR (AAG) in CT!

Connie Reguli herself has NEVER tried to help us in any way!

his minion trolls like “Rene Ollar Poole, Chloe Liam, Sofia Erickson, and Ashley Fitzmorris” are SUPPORTING HER on her family forward page!

That right there should tell you A LOT about who she really is!

Telling us to plead guilty of a crime we did not commit so we would be thrown in jail and our kids would be kidnapped from us and adopted out to abusive foster homes is NOT my idea of trying to help us! She keeps telling everyone that she “ gave us advice and that we didn’t take it.” Even when we spoke to the TN DCS worker and asked her what would happen to us if we plead guilty like CT wanted us to, she even said ”well I don’t know because I have never been on a case before where they were trying to have neglect charges drawn up on the parents!”

The “advice” Connie Reguli gave us that she told everyone we were “stupid not to take” was to “plead guilty to child neglect” like they wanted us to, to get these DCF TERRORISTS to transfer our case and our daughter to TN.

It would have landed us in PRISON and they would have ABSOLUTELY kidnapped our two boys and adopted them out by now! THEY WOULD NEVER HAVE KEPT THEIR WORD AND WE WERE NOT ABOUT TO GO TO JAIL AND HAVE OUR OTHER CHILDREN TAKEN FOR CRIMES WE DID NOT COMMIT!

SHE ALSO TRIED TO CHARGE ME NEARLY $1500 just to sit at the house with my mom and our children (which is literally just down the road from her house on the same street) for 2-3 hours during what was supposed to be our trial, just in case the cops or CPS came knocking and wanted to “ inspect the house/children” because my mom was afraid to be there alone with no witnesses after hearing what they did to us in CT while Peter and I were traveling alone and had no one to help us and they kidnapped our newborn daughter!

I mentioned this in a previous post and Connie Reguli came onto my page attacking me claiming that “I am a delusional liar” and that she “never told us to plead guilty to anything!”

While commenting on my post, she started MOCKING ME AND MAKING FUN OF ME THAT “I HAVE NO ATTORNEY AND THAT I AM ABOUT TO LOSE MY DAUGHTER FOREVER!”

Then she wrote up all these posts on her group “family forward project” attacking me even more. Does that really sound like someone who actually “cares” about children and families, or rather does it should like someone who is just greedy for thousands upon thousands of dollars and if you don’t have it you can just get lost!?

Few of her clients have ever actually gotten their children back and those who did said they had to take out second mortgages on their homes and all sorts of other things and ended up paying out around $200,000-300,000 in attorney fees!!!!!!

Many people have asked for proof that she told us to plead guilty to a crime we did not commit.

Well here it is.

I have posted the pictures of where she absolutely did try to convince us to plead guilty on behalf of her corrupt CT DCF friends in CT!

More recently we had contacted her via message as well as voice mail to ask her about what we should do regarding our new baby in TN.

Since she knows that we don’t have thousands of dollars to pay her, so she just continued to ignore us.

SHE HAS NO INTENTION OF EVER HELPING US AND NEVER DID!

THE ONLY PEOPLE SHE WAS TRYING TO HELP BY TELLING US TO PLEAD GUILTY TO CRIMES WE DIDN’T COMMIT Were HER BUDDIES UP IN CT.

She claims that she is in this business to help children and families but if you are ever unfortunate enough to be in a situation where you need her services but do not have thousands and thousands of dollars to pay her, you too will soon find out what she is really in it for!

She even told us that she has her own news media rep and she could have easily asked him to do a piece on us to get our story out there so that maybe we could get some help to get our daughter back from the corrupt state of Connecticut.

She never even TRIED to get him to help us, but I NOTICED she had him do a story on HER the very DAY that she was arrested for “custodial interference” when she allowed her client, who I think had been arrested for domestic violence, hide her children at Connies house so they wouldn’t be taken by the CPS.

There are many ways she absolutely COULD have helped us without charging us tons of money, she just didn’t want to because she knew it would have made her buddies in CORRUPT CT angry.

All you have to do is read a few of her reviews to see how very abusive and dishonest she is.

Anyone who wants to continue to believe she is some great warrior for children and families, go right ahead.

Peter and I know better. 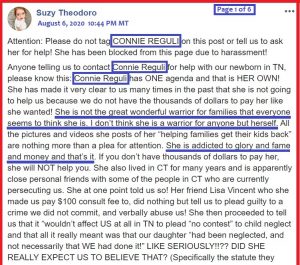 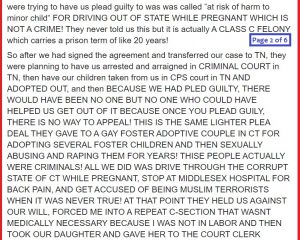 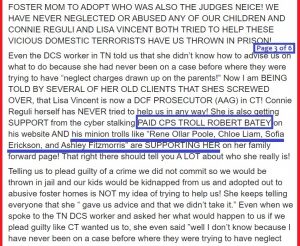 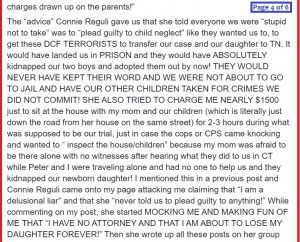 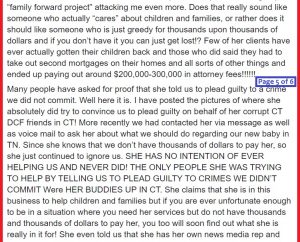 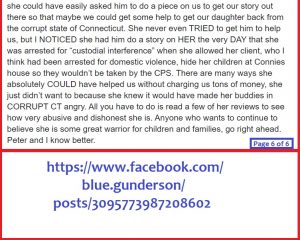 There are quite a few comments posted in that thread on Suzy’s page.  Suzy even posted the following in response to some of those comments: 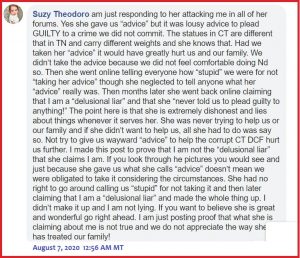 It seems Suzy also posted her lenghty message and screenshots to Connie Reguli’s “Family Forward Project” group and there were about 20 comments added, some from Suzy, before that thread was removed. 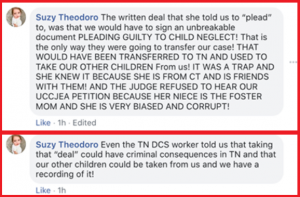 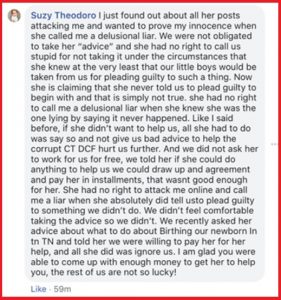 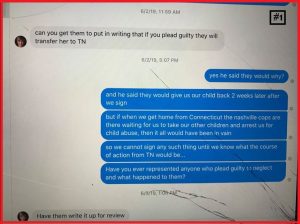 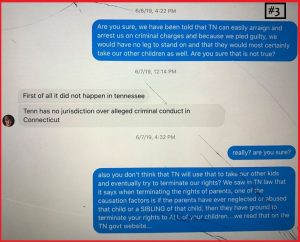 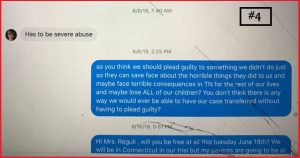 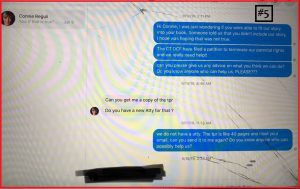 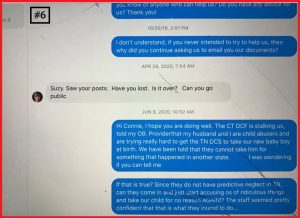 Links to Related Articles on This Site