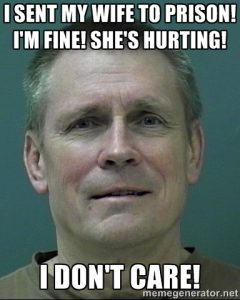 As King David sent Uriah to his death, so Kent Hovind sent his wife to federal prison.

Kent Hovind: (To Affirm or Deny)

Those familiar with Kent Hovind are aware of Kent’s common technique of attempting analogies between himself and certain persons of the Bible, and that in a manner that makes himself the star of his modern day, end-times theology.

I think the analogies fail, but there is one that I think works.

That analogy is found in 2 Samual 11 and there you can find the details as to how it is that today it is common for preachers to allege, and rightly so, that King David killed Uriah.

On the same basis, for those who know the details of Kent Hovind’s criminal career and prosecution, it can be alleged, and rightly so according to biblical precedent and common sense, that Kent Hovind sent his wife to federal prison; something he has yet to admit, repent of, and bring forth his works meet for repentance.

Jo Hovind did not have to go to prison!