For several months the April Birman story has been making the rounds in social media and a few legitimate media outlets.  Recently, April Birman died and the story has been gaining attention from various angles; mostly from the anti-government, anti-CPS movement.

I have chosen a different angle as far as my reporting.  I will try to fill in details here as I get time.

To date, I have been reporting on the story in various discussion threads in my FaceBook group at:

Following are some links to news stories on the case:

John Bolenbaugh’s activist page is at:

Link to Bolenbaugh radio broadcast where he discusses having talked to April Birman an hour or so before she allegedly took her own life.  Did he refuse to accept responsibility for being her youngest child’s father?  Is that what “triggered” her course of action?  Is John Bolenbaugh the father of April Birman’s youngest child?

Why haven’t the fathers of April Birman’s children been identified and taken custody of their children?

Well, there seems to be so much to figuring out this case.  We may never know, as is common, considering the nature of the case, but we can know some things, and some of what we might know might be reported in this article.

Courtney Bolenbaugh, John Bolenbaugh’s wife, posted a FaceBook message critical of some of the reporting she found there regarding April Birman, and her post was critical of April Birman.  After her message started making the rounds and that angle of the story started to be questioned, she wrote to me and said she was shutting up about it.  Beverly Tran on her blog had “shared” Courtney post.  It now indicates that the FaceBook post has been removed.  Are some now trying to cover up John Bolenbaugh’s involvement with April Birman and his possible helping to “trigger” her reported suicide?

Before and after images taken therefrom

Laurel Payne, April Birman’s mother, has confirmed that Lala Fox is working on behalf of the family. 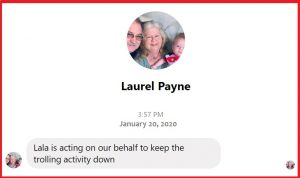 Following is one of Lala Fox’s recent posts noting the unresolved issue as to John Bolenbaugh’s relationship with April Birman and her youngest son, Liam. 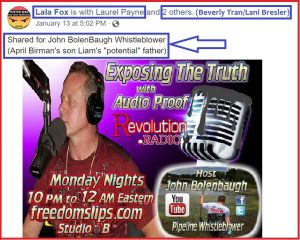 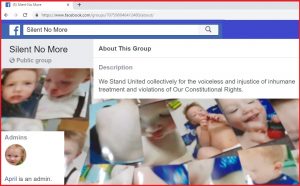 In the context of the ongoing controversy over the April Birman story and Lala Fox’s fuss with Shara Michelle, Lala has again threatened me.  Link below is to Shara Michelle’s thread from which screenshots were taken.

The “allison” mentioned above is Allison Folmar, Lala’s lawyer!

Related article on Lala Fox is on this site at:

Courtney Poole, one of April’s relatives, is a member of my Hovind FaceBook group and posted the following today: 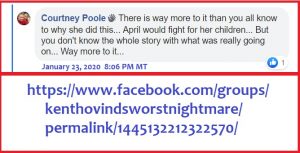 The family referred to is the April Birman family!

In my private correspondence with Laurel Payne, she indicates the father of the youngest child was never identified and that the child will either be placed with April’s family or adopted.  April’s family has been approved for placement, but the foster parents who want to adopt have the right to object or appeal.

Levi, April’s son that took the youngest out “that night” has since had some other run-ins with the law, minor issues.  However, he has caught some jail time.   He is also scheduled back in court on May 8, 2020 as to the incident causing the children to be taken.  Given his apparent mental impairment, it may be he can make a deal that will keep him from getting any more jail time and will get some help; possibly moving to a residential facility equipped to deal with his disability.

It appears April’s son has recently negotiated a settlement of his criminal case as reflected in the article below: 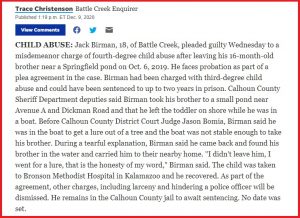