(UPDATE December 23, 2016 9:20 PM MT – It appears Joshua Joscelyn has recently removed his article referenced below; making what is preserved here all the more historically valuable.)

The picture is of Joshua and his wife who, not long ago, were both arrested for child endangerment after they were caught having left their kids in a running car and air conditioner while they were up the street at a veteran’s monument railing against the military and otherwise doing their street preaching act.  Unlike Kent, they made a deal and, as I recall, did not have to serve any jail time except maybe for the night they were arrested. 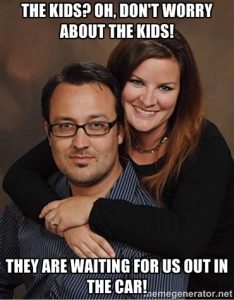 Joshua Joscelyn is a preacher of sorts in the Pensacola area and was a spokesman of sorts during the Hansen-Hovind litigation in 2015.  He was interviewed by documentary film-maker Jonathan Schwartz during that time frame (go to bottom of this page for links to videos of Joscelyn interviews).

When Kent Hovind called me to invite me to his then-secret wedding, I didn’t know what to say.

I was saddened to think it had gone this far.

For a long time, I had known about Kent Hovind’s mistress and how she had wrecked his marriage and family, but I just never thought it would come to this.

Somehow, I thought he would do the right thing and try to save his marriage.

But he was too distracted to be a husband to his wife.

As has been the case for many years now, Kent Hovind was too busy with his mistress.

And his mistress is not Mary Tocco.

My Experience with Kent Hovind

Many will recognize that I have been one of Kent Hovind’s staunchest supporters over the years, and have even stuck my neck out for him.

It pains me to write against him, and I have put it off for quite some time.

I have written about my shock at the negative attitude towards Dr. Hovind that I found among his own family members and those who had worked under him.

Kent Hovind does not respond to correction.

He will not listen to it for even a few seconds. And he has a mistress.

Many are familiar with my aggressive defense of Dr. Hovind and how I bull-horned the courthouse for his release throughout the second trial.

Kent Hovind had no better friend than myself.

I still believe he was unjustly sentenced, but something else I now knew about him worried me.

When he came home, I spent some time with him, noticing the curious, makeshift bedroom he had set up adjacent to his office.

I ate meals with his family and observed the awkwardness of the family dynamic.

On more than one occasion, I tried bringing up my growing concerns with him, but he quickly changed the subject or acted like it wasn’t important.

And that is why I am writing this – because Kent Hovind refuses to listen to anything negative I have to say in person.

For a long time, he has refused to listen to concerns from me or anyone else.

Perhaps he will read this and know why I can no longer support him or his ministry. And perhaps others will pause and reconsider their support for him when they read about why one of Dr. Hovind’s most stalwart defenders is disavowing him.

The woman he is marrying probably has little to no idea what she is getting into, and may well regret her decision to marry this man who has been chasing this same mistress and abandoning his family for decades.

…when Mrs. Hovind expressed her fear that Kent’s continued recklessness was endangering her, Kent Hovind changed nothing.

Having just returned from nearly a decade-long separation in prison, Kent Hovind did little to nothing that we can discern to restore his relationship with his wife or calm her fears.

Instead, he launched right back into his ministry work in spite of probationary restrictions and concerns raised by the legal community that, if he was not careful, he might overstep his restrictions and land himself back in prison.

Kent’s response should have been to drop everything (including his ministry), and win back his wife.

Instead, the divorce was completely uncontested, finalized in record time, and now Kent admits on video that he had his eye on Mary Tocco, a divorced woman, since February of 2016, a full month prior to the filing of this divorce.

And in this self-congratulatory video, he makes it clear that his purpose in entering into this is to just “move on” and get back to “serving the Lord” – while the ink is still wet on the divorce papers.

This is a tragedy.

Kent Hovind has…lost his own family and should be ashamed of how he is acting.

Don’t be deceived by his zeal for the ministry.

Don’t overlook his complete abandoning of his family and pretend everything is all right.

Kent Hovind is now marrying a second wife, but until he repents, he will always have a mistress.