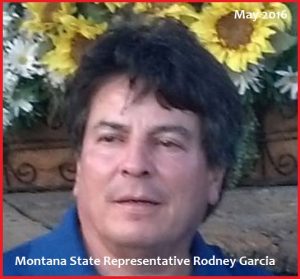 God is behind this, no one can beat us, God is with us; the big guy is on our side. 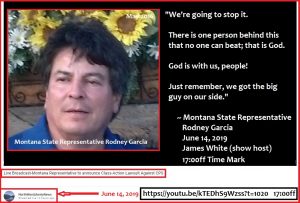 The above video is a production of James White of Northwest Liberty News, the guy who also promotes various conspiracy theories and sovereign citizen legal theories.

I want to press charges against CPS in Montana against human trafficking and stealing babies; even 24 hours old.  Just recently that happened (Sammy Dalke case? – RLBaty), and they think they are above the law.

We have about 9 lawyers possibly going to work with us and we’re going to file civil suits all across the State of Montana.  I told them, this is what I want to do with them, I want to put them in prison, I want to confiscate their property, and pay restitution to the families that have been damaged.

They should be brought up on murder charges too.

I’ll be talking to the lawyers about that and if they agree with me, we’ll have them in murder charges too.

That means any CPS employee taking children away not within the law.

If they do it outside the law, we’ll show them they are not above the law.

The lawyers said they aren’t going to charge for services, but they wanted a fund-raiser.

Denise Johnson, a real advocate for the people, is with us.  She ran for the House of Representatives and lost.

I’ll repeat that (those interested in taking part file a 2-page affidavit – RLBaty) one more time if you want to be in that class.  If they are not honest they are going to be pushed out right away because I don’t want to arm the ones that are dirty.  I will prosecute the ones that don’t tell the truth. 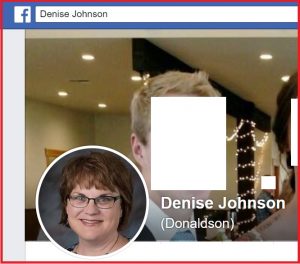 Link to Denise’s appearance on James White’s program in 2018: 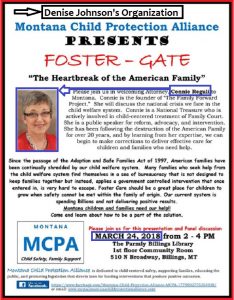 Yes, the more I listen to James White of Northwest Liberty News and his promotion of Rodney Garcia and Rodney Garcia’s own words, I think Rodney Garcia might be engaged in a classic case of political pandering.

After all, there has been nothing to stop Rodney and any legitimately affected parent(s) from going after CPS employees and/or the organization if they have been wronged.

You will notice some of Rodney’s comments on James White’s program June 14, 2019 were quite limiting; he only wants legitimately affected persons to apply for his support and participation in the class action.  And the class action appears to be independent of Rodney’s effort to provide work for 9 or so lawyers who claim to be pro bono but can be expected to do what they can to make sure they get paid through fund-raising, the State, or ultimate judgments (classic ambulance chasers perhaps).

My cynicism has been forged, in part, by James White’s recent promotions of the Sammy Dalke case and C. Clarke & Danielle Holm cases; cases which I know a little about and have judged to be without merit as far as the outlandish claims Dalke, the Holms, and their “advocates” make for them.

For all the whining about “no warrant, no abuse, blah, blah, blah”, has Rodney Garcia ever introduced a bill to repeal the Montana law that allows for just such incidents?  He has at times presented as if he was unaware, just as James White has presented as if he was unaware, and yet the evidence shows they know full well that Montana law allows for such, and legitimately, constitutionally so, as do all or most states.

Following are links to my recent articles, on this website, dealing with James White of Northwest Liberty News and his promotions:

I just noticed that Debi Westlake who blocked me rather than talk openly and honestly about her and her people’s problems in handling CPS cases, is promoting James White’s website narrative regarding Garcia’s gimmick noted above.  It comes across a little different than the video, in my opinion.

Montana CPS may soon see their day in court. At least, if Representative Rodney Garcia (MT HD52), has anything to say about it. Their agents, and their organization, as a whole, may soon face a judge, with their actions being under legal scrutiny. Representative Garcia aims to assure such a day, as he announced during an interview on Friday’s edition of Northwest Liberty News’ show. The lawmaker wants to move to file a Class Action lawsuit against Montana state CPS.

Representative Garcia takes his job as a state representative very seriously. A long-standing man of community interests, he has always been focused on helping the people around him. Describing himself as a “problem solver”, Representative Garcia set to fixing the problems with and within CPS immediately upon entering his term in the capitol; in the state’s legislative session of 2018-2019, he was an avid backer of three bills that would’ve protected parent’s rights of proper custody and relocation procedures in their dealings with CPS. The Billings representative even pushed for a proposed bill to de-fund the organization-to the amount of $50,000-in order to disincentive the crimes and drastic, illegal actions that are seen in cases over and over again across out beautiful state. And, although the bill was unsuccessful this year, that has not stopped Representative Garcia. His goal in fighting this organization remains the same: he wants to stop the suffering.

The suffering and strife of families who have had their kid(s) taken, being given no real reason, while the child is then relocated by CPS. The parents who are fighting for the return of their babies, to make their family whole once again, but who cannot get a fair hearing or even a proper explanation of the circumstances from CPS.

The suffering of the children, who are suddenly separated from their loved ones, their siblings, and the parents that raised them, only to be put into a potentially dangerous and nearly never ideal foster home or other temporary living situation. The whole experience invites a loss of innocence that can never be replenished, despite what the outcome of their particular case is.

The Republican representative wants to see an abrupt end to mishandled CPS cases that result in such suffering. To do so, he plans on filing a class action lawsuit against the state’s CPS department. He’s working with nine interested lawyers, discussing the specifics and the pursuits to be poignantly addressed and the criminal charges to be brought.

In his interview with James White, Mr. Garcia informed the parents (and people) of Montana that they may partake in the evidence-gathering period of the lawsuit by submitting their notarized affidavits, summarizing the personally-experienced abuse parents have faced in their dealings with Montana CPS.  The details of the case are to be written in a format of less than two pages, and then, after being notarized, can be sent to Rodney Garcia, at 114 Orchard Lane, in Billings, zip code 59101. We urge any of those parents who have wrongfully had their world ripped apart by bad agents or practices in or from the CPS to write in, in order to validate and strengthen the efforts in pushing for a better way of work when dealing with such intense issues.

We want reform within the CPS. We want whole families, restored righteously, without sacrificing the safety of any child. We want regards for the records of reputation, the preservation of self-worth, and the weight of self-responsibility of each and every one of those involved, when dealing with these delicate state-involved child-custody/relocation cases. We want those who have wronged the system from within or from the sidelines, to be held accountable for their actions.

And it seems that Representative Garcia wants the same. So we say, support him.

To find out more about the lawsuit, please listen to the linked interview. And be sure to keep updated on our channels video posts for future info.

Here’s an article in the local Montana media from last January about Garcia and his poltics:

There are times when I come to close to wondering if the people Montana Republicans send to the Legislature aren’t part of the most elaborate hoax ever conducted by Punk’d.

Billings Representative Rodney Garcia has done little to abate these concerns, as the freshman representative Billings who spent his campaign railing against socialism proposed today that the state of Montana borrow $500 million to buy the power plant at Colstrip and turn its management over to a five-person government board.

Hugo Chavez would be proud.

Garcia’s scheme comes a week after a report that found the free market has killed twice as many coal plants in President Trump’s first two years than in President Obama’s entire term. Garcia not only wants to maintain the Republican strategies of ignoring climate change and the market forces that are making coal production less and less profitable every year, but he wants to hang the people of Montana with an economic albatross that will never pay for itself.

Garcia’s bill manages to offer the almost impossible combination of a massive corporate giveaway to a failing industry and a pivot to state-owned power production.

Garcia implausibly claims that he is proposing this legislation because his “Billings’ South Side [constituents] asked him to do something to save the power plant, which supports the city of Colstrip’s 2,300 residents.”  Somehow I imagine that the good people of Billings want other things from their legislators–like the improved schools, roads, healthcare, and infrastructure that Republicans always claim we can’t afford–rather than to artificially prop up a community that’s a two-hour drive from their concerns.

I don’t think anyone should mistake my mockery of Representative Garcia with a lack of concern about the people of Colstrip, but if we have $500,000,000 to spend to prop up an increasingly uncompetitive power plant to fuel Mr. Garcia’s Marxist dreams of state-owned power, couldn’t the state sensibly spend money to retrain Colstrip workers for the economy of the 21st century, not the 18th? 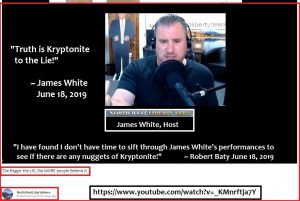 There is a new organization in Montana, and its name is Montana State Council and Forum on Judicial Accoutability, Inc.  Its registered agent is Brad Crabtree and 2 of its board members are Matt Furlong and Strausie Hart.

In recent days it appears they have decided that Garcia’s pledge of a class action suit isn’t going so well and so they are trying to promote one of their own based on the recent West Virginia suit. 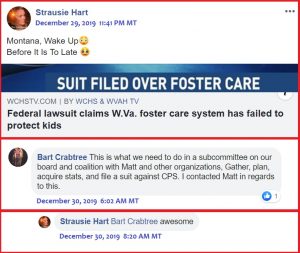 Comments from Strausie and Bart: 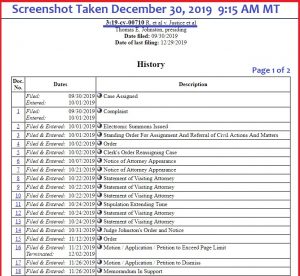