I reviewed some of the recent posts from C. Clarke & Danielle Holm and decided to post these comments regarding their “odd beliefs”.  See references following my comments as to the prompting for this article.

Like so many before them, C. Clarke & Danielle have contrived a religious script, modified to fit circumstances as they develop, and instead of taking personal responsibility for it they have laid it off on some “Creator” who tuned them in directly, literally, and personally and in their quiet moments allowed them to receive communications denied lesser sorts like “us”.

They are definitely “fakin’ it”!

They had about 35 years life experience from which to have drawn in formulating their “odd beliefs” and such “odd beliefs” appear to have been stimulated, in part, by mental illness.

It is also worth noting that they have, for over a year, publicly exhibited their sovereign citizen legal notions and, as apparently intended, insured they would not have to parent the child that was born to them in October of 2016.

That child was taken into State of Alabama custody in October of 2016 and has remained there due to the Holms’ failure/unwillingness to establish they are willing and able to care for the child.

The Holms reject the Bible as a religious guide and authority for resolving matters of faith and practice, but they continue to try and “fake it” with those who desire to accommodate their “odd beliefs” as just more of the same when it comes to biblical based religious notions.  Susan Cobb, for one, tries so hard, despite the Holms’ anti-biblical/anti-Christian claims, to make them heroes of the Christian faith.  As long as they claim their child was kidnapped and promote their anti-government, anti-child welfare agenda, the movement appears desperate to make them fit in.  It’s not about the child.  It’s about the anti-government/anti-child welfare movement.

C. Clarke & Danielle Holm are welcome to their “odd beliefs”; considering they have shown themselves incorrigible with regards thereto and they have a “right” to such a course.

The “root” of the custody problem regarding Baby Holm, however, is another matter and the Holms refuse to face and deal with the facts and the law justifying the State’s actions, continuing to falsely claim they are not subject to the “laws of man” and that their child was “kidnapped” and has been “held captive” with no legal or factual justification.

My challenge for the Holms to come out and face the facts and the law justifying the State’s actions remains unanswered; by either the Holms or their champion.

The State of Alabama was factually and legally

justified, under the provisions of Alabama Code

The State of Alabama was factually and legally

justified, under the provisions of Alabama Code

The Holms know that I am right on those propositions.

The Holms know that they are wrong on those propositions.

The Holms can’t handle the truth.

Who wants to come out and handle the truth with me! 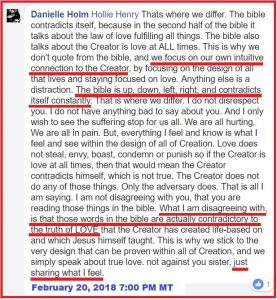 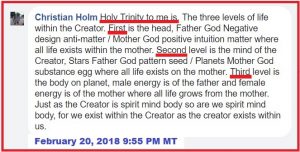 The full text of C. Clarke Holm’s last noted post above, from his FaceBook page thread at: 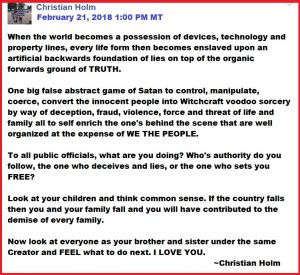 The latest (excerpts) from C. Clarke Holm and his FaceBook page thread at: 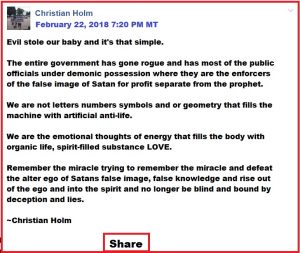 And from Danielle Holm’s FaceBook thread a short time earlier:

A little paranoia never hurts either:

Bwahahahaha!  Danielle & C. Clarke Holm can’t handle the truth, and it shows in Danielle’s lame efforts to explain why they don’t do media interviews.  Excerpts below from her latest thread at: 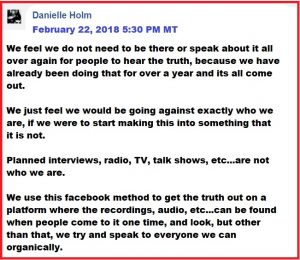 This morning from C. Clarke Holm’s FaceBook thread at: 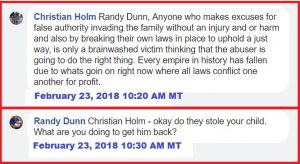 C. Clarke Holm’s response seems to be they aren’t doing anything and are moving on without their baby; perhaps suggesting that, as has been supposed, their parental rights have been terminated. 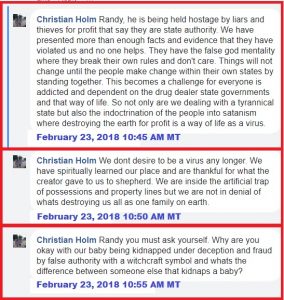