Beginning in January of 2020, Laurel Burchell initiated a FaceBook Messenger exchange with me, Robert Baty, from her account with the following address.

I did not respond, via Messenger, to the messages.

I have been harassed and threatened for hours by your bots. I fear for my life and my families life.

I will be contacting law enforcement about this.

They are associated with you. Ask Lola and Fabian the accused pedo about the threats. Christy is on now. I have read her abuse yet. I suggest that you put a stop to this bullying. I am a disabled veteran and it is triggering my PTSD.

You have been harassing and bullying myself and my family. I have asked you to stop but yet you continue. Your followers have then been harassing my family and I . it is my intention to go into a court and ask that you are ordered to stop with the harassment. It is also my intention to file a civil suit against you for the damage it has done to us.

It is wonderful news that Sophia will go back to her family. She will more likely than not be a part of her biological parents again- praise the Lord!

Though you and your agents tried to interfere, it didn’t work.

You have my permission to share this on your site.

After much thought, I believe your Sofia letter is a fake – perhaps manufactured by Kimberly Sparks.

Baty you are a sick person!

Bobby Boy is it true that Sofia is going to live with the grandparents or did you make up the story?

As you know, your posting about me daughter and I on the county facebook page was removed because of harassment. What else have you done to us?

You are a sick person Bobby Boy. What happened in your life that you always want to harass others? You spent you career cheating and hurting others. For the last 15 years you have attacked people. You should be in prison.

I loved the interaction between you and the gentleman with Truth Radio. He had the.perfect response to you. You are no match for him.

I feel Lola’s soul dying. Are you going to have a memorial service for her?

As you have probably guessed, your agents are getting bored reading about my daughter and I. You can tell your stupid Pamala G. That I am not a victim but a survivor. Look how long I survived your abuse.

You call yourself a journalist. Bull! You are an abuser. That is why you continue to bully us.

Beginning on Monday, February 15, 2021, Laurel Burchell initiated a FaceBook Messenger exchange with me, Robert Baty.  This article is intended to memorialize that exchange.

Related articles on this site:

Harassing my daughter and I again I see.

You are trying to destroy my family and others. As for my grandson’s father, he is a meth addict. He was in prison during the CPS case. He has spent the last 20 years in and out of prison and jail. He is still in the court system for violence. He does not see his son because it must be supervised and he won’t do it. He is at least 6 months behind in child support. Know who you’re hurting!!!

Nicole Roberts lied about visitation. He must be supervised because of his behavior. He chooses not to visit through the county supervised services. God bless the county for doing that for his safety.

As for Nicole, she didn’t get custody probably because both of her children were born with drugs in their system.

I know one day you will live to regret the way you have treated people.

Thanks for the feedback.

Bobby you did exactly as I wanted you to do. It got the people lying on me again. You won’t get what you want–the child being taken by CPS! They may show at my door but that’s it.

Oh the tangled lies we weave when we attempt to deceive.

That is what your website is about–a tangled mess of lies.

I’m in FB jail and can’t comment to Marie White the rotten Georgia peach. Pathetic thing she is. She has nothing better to do than lie a out people.

As for Nicole, domestic violence runs through their veins. She couldn’t pass the testing for taking Wyatt in. I was required to become a foster home which I did!

Good morning Bobby. I’ve got some interesting news for you. Note this screen shot. The horses are in need of being rescued. There is at least 1 dog that is chained up in the elements 24/7. Interesting how these groups only go after my daughter. For your information, the land owner, Mary Stevens, lives in filth. Outside of her front door are piles of feces. She doesn’t let people inside her home. My daughter was in there years ago. Such a mess.

Let’s see what king of story you can all spin on this one!

OK! I would recommend your daughter lead the way by getting her animals moved to one or more of the rescue agencies.

Those horses and the dog are in great need of being rescued. Are you going to post this?

Is your daughter going to lead the way and have her animals moved to one of the agencies?

I don’t control what she does and I don’t know her plans.

You contacted me. Contact her and make that suggestion and let me know what she says.

I actually have nothing to do with the animals even though it has been reported differently!

I know that she is considering Her options.

Mary Stevens has been cited and in court multiple times for the condition of her property.

My daughter does not hoard but Mary Stevens does.

Here is another story for you. Floss Blackburn owner of Denkai Animal Sanctuary is in it for the donations imo. She just opened another sanctuary in New Mexico. She needs animals and donations. She has a bad reputation.

What’s your story on your alleged offer to settle your daughter’s animal dispute for $125,000??

I was approached and answered. No extortion.

I was approached to sell. They Are Not my animals.

Halina had nothing to do with it. I knew that it was a set up and went along with it anyways.

I can see you playing that out like that.

We are dealing with cowards and bullies.

In my opinion, SF Tay and Marie White are the biggest cowards and bullies. Such thugs!

I never said that the horses were Mary Stevens. She has boarders and allows the horrible conditions.

Again, your daughter seems to be in a good place to start the clean up.

Let me know what Halina says about the proposal that she lead the way and allow her animals to be “rescued”.

When’s the last time you talked to her and suggested she take the initiative to resolve the matter allowing the animals to be “rescued”?

Those animals don’t need to be “rescued.”

I talk to her about getting rid of them.

Her chosen method for ridding herself of them appears to be what has caused the controversy.

It is all a lie. She is not responsible for their deaths.

After knowing Mary Stevens for 10 years, Mary turned on Halina after her dog was torn to shreds by another renters dog. I paid over $400.00 to have the dog stitched up.

Halina called animal control on that dog. AC did nothing. Then the accusations started flying.

Some of her animals had their skulls bashed in by surrender we assume. Couldn’t prove anything.

Much more to this story.

Well, maybe that story can be told …………………. after the animals are removed and placed in a more habitable place.

How close are you to getting Halina to get the animals removed?

Hopefully that can get done by close of business today.

No good reason to wait any longer.

Halina is an adult and doesn’t listen to anyone.

So you’re withholding the story?

Check Denkai’s form 990. She makes the money through donations. She is bringing in money now because of this.

Are you refusing to exercise your connections with Halina and lobby her to just give up her animals?

Seems to me there is no good reason for you not to document your efforts and Halina’s response.

Seems to me there is no good reason for Halina not to have already given up her animals.

Reportedly, she wants to get rid of them and move out of State.

Let’s help her get rid of the animals, today.

Let me know what she says about that possibility.

(See continuations in screenshots below!)

Laurel Burchell has made her appearance in the “Kent Hovind’s Worst Nightmare” FaceBook group and has offered to answer questions.  We’ll see how that might go.

There was considerable amount of banter with Laurel by other members of the above referenced group.  Laurel and I had additional private, Messenger, exchanges as noted below. 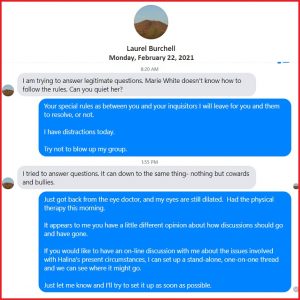 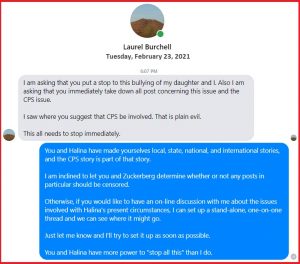 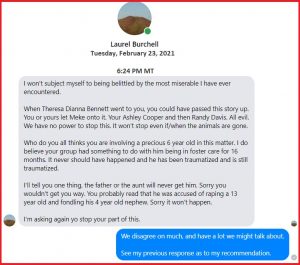 (Go to above link for video from which images below were taken.) 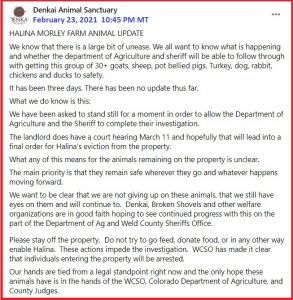 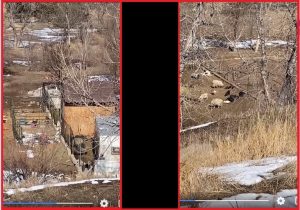 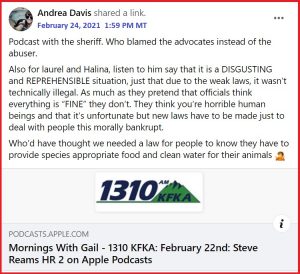 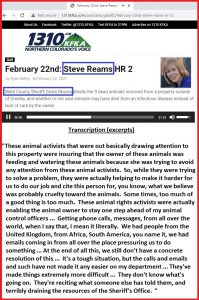 Halina Morley’s upcoming court dates shown below.  The first one relates to a restraining order and the second one, I believe, relates to the eviction proceedings.

Link to broadcast referenced below:

This was precipitated by the Weld County Sheriff’s comments reported above critical of those interested in the animals’ welfare. 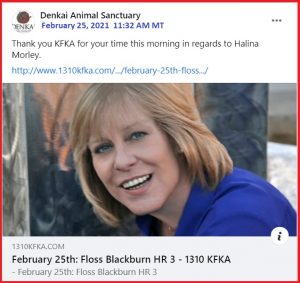 Link to FaceBook post below which notes it is Halina Morley who has filed a restraining order against the property owner. 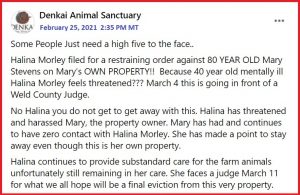 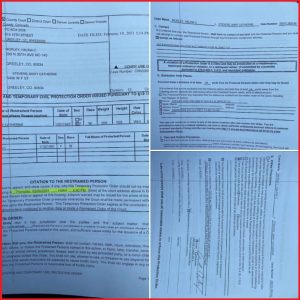 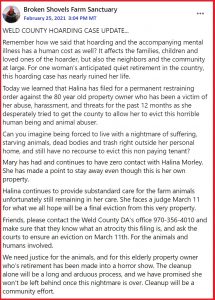 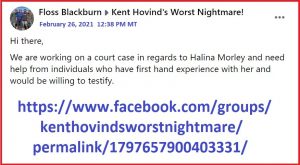 The Latest Between Laurel Burchell & Me via FaceBook Messenger! 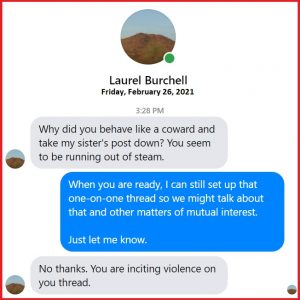 More banter with Laurel after I posted Halina Morley’s report from the Colorado Bureau of Investigation at: 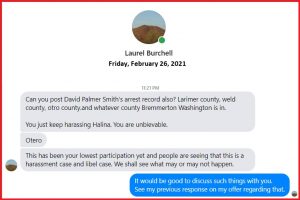 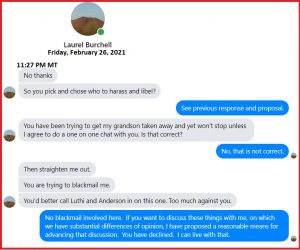 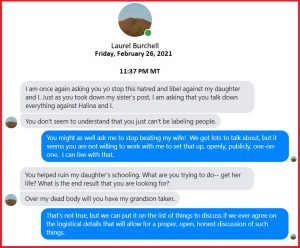 Laurel’s morning missives – I did not respond! 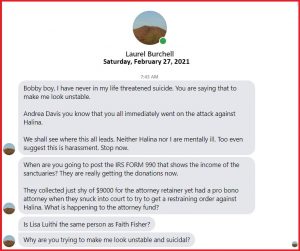 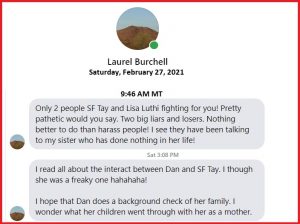 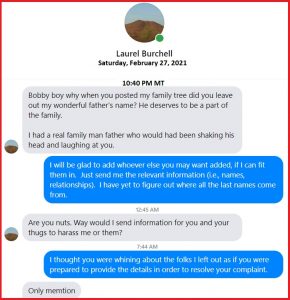 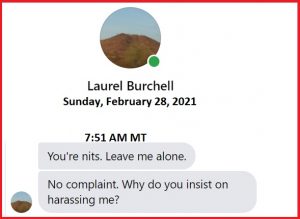 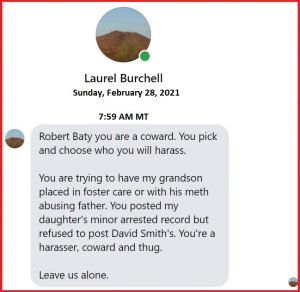 The family branch Laurel was whining about:

I posted the following to my FaceBook group and Laurel responded via Messenger. 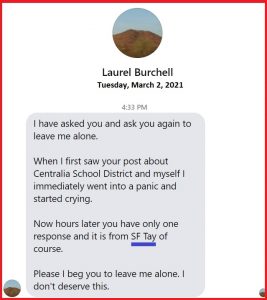 Guess she saw I posted her message and followed up with: 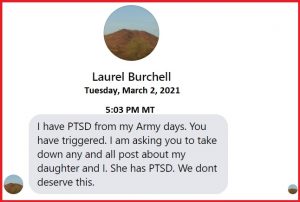 In response to my mere mention of Laurel Burchell in a FaceBook post at the following link, Laurel responded via FaceBook Messenger as shown in the screenshot below. 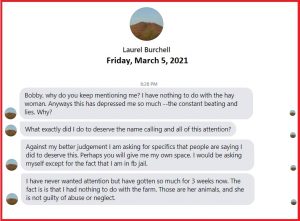 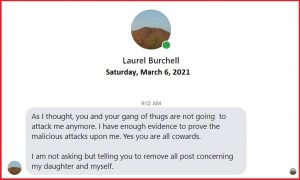 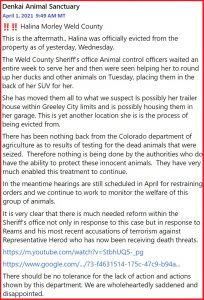 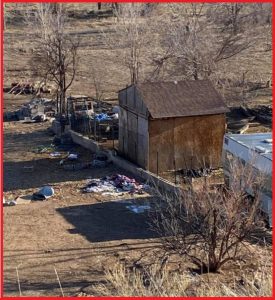