It has come to my attention today, June 26, 2019, that a wannabe journalist by the name of Michael Volpe has been spreading around the report that I have been paying Meko Haze (aka Barnabee Jones, aka Michael Mihalakis) to bad mouth certain anti-CPS characters like Lee Kenworthy & Shara/Sharon Cronkite Michelle Wolf Donato Austin Lentin.

So, you get this article for ready reference.

Who is Michael Volpe?

After spending a decade in finance, Michael Volpe has been a freelance investigative journalist since 2009. His work has been published locally in the Chicago Reader, Chicago Crusader, Chicago Heights Patch, and New City. Nationally, Volpe’s work has appeared in a wide variety of publications including the Washington Examiner, the Daily Caller, Crime Magazine, the Southern Christian Leadership Conference Newsletter, and Counter Punch. Volpe has been recognized by whistleblowers as leading the charge in getting their stories out. His first book Prosecutors Gone Wild was published in October 2012, his second book The Definitive Dossier of PTSD in Whistleblowers was published in February 2013 and his third book Bullied to Death was published in August 2015. 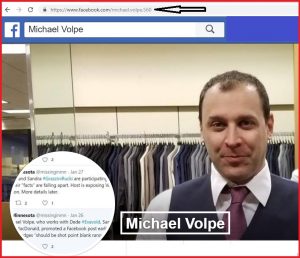 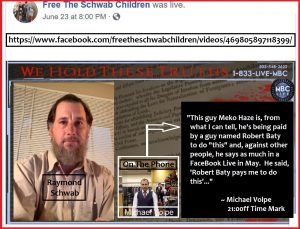 What Michael Volpe Was Talking About: 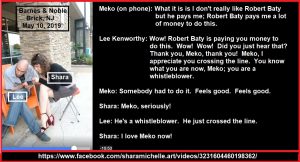 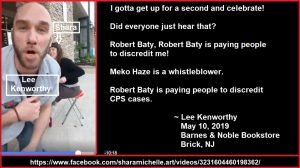 I learned about Meko’s claim after the fact.  As far as I know, no one but some anti-government, anti-CPS, paranoid types put in stock in Meko’s claim, and one could never imagine, in my opinion, the response by Shara and Lee and now so many others.

I’ve been accused of being a “paid disinformation agent” (and worse) for years.  From time to time I play into the role considering my adversaries “can’t handle the simple truth”.

Michael Volpe, I don’t know how you can recover from such foolish blundering, but do keep me advised of your efforts.  I would like to post some legitimate update here to help let the world know you have recognized your blundering and what you are doing to reverse course.
.

I sent The Daily Caller a request for a public statement regarding Michael Volpe’s blundering regarding me and sent them a link to this article, via FaceBook Messenger as shown below: 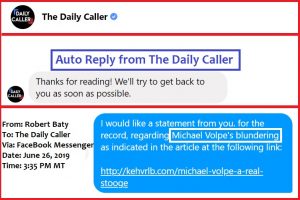 Michael Volpe got into with some guy named Randy Smeltz on Michael’s personal page in the thread at the following link:

Michael Volpe, in that thread, seems to be trying to cover for his blundering and justify his claim, which I think he misrepresents.  So, I posted the following in that thread.  You can go to the link above for the complete set of comments and latest additions. 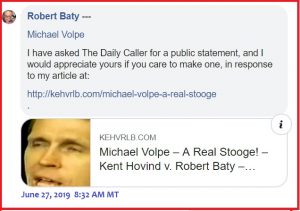 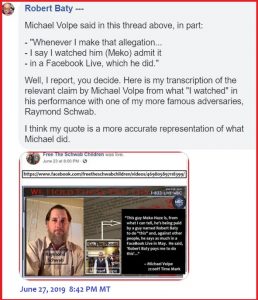 Then there was just this exchange with Michael: 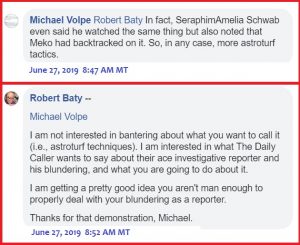 I threw this into the mix as well: 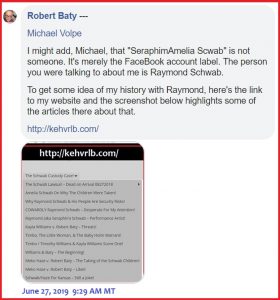 I don’t know, but it looks like Michael Volpe is trying to change the subject and run away from facing his blundering about me like a man.  There was this: 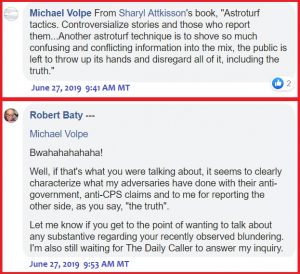 It seems Michael Volpe has most recently decided to capitalize on the death of Bill Sardi, one of Kent Hovind’s director’s for his 501(c)(3) nominee corporation.  Volpe’s angle appears centered on anti-family court theology and going after Bill Sardi’s ex-wife as the cause of all the stress in Bill’s life that, allegedly, caused his death on February 14, 2022 (as opposed to Covid which has been rumored).

Lots of nasty stuff going out and Volpe posted a thread in a FaceBook group at:

After I posted the following message, Michael Volpe blocked me! 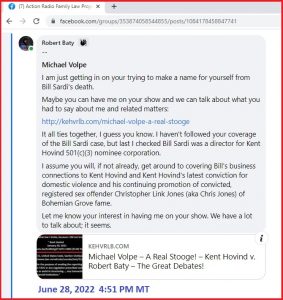 Other excerpts from the Volpe thread in that FaceBook group.  Go to link above for many other comments from Lucy, Michael and others.