As many of us know, Kent Hovind does not like to take responsibility for much of anything, and Glen Stoll has been one of his “go-to” guys whose counsel he reasonably, allegedly, relied upon to try and cover his criminal activities.

This page is a work in progress in that I do not presently have the latest, up to date information on Glen Stoll’s whereabouts and operations.

Here’s a link to the ORDER providing an injunction against Glen Stoll and Michael Stevens and related operations from 2005:

Here’s a link to a news account of what is behind the above injunction:

Since that time it appears that Glen Stoll put together something he called the Arlington Law School, with an Internet address shown below:

Glen Stoll has been known for his association with the Embassy of Heaven organization as noted in the Wikipedia article below:

The Embassy of Heaven is a Christian-based new religious movement based in Stayton, Oregon that seeks to separate from secular government.

Its members profess to be literal citizens of the Kingdom of Heaven and reject any ties to what they refer to as “worldly governments”.

Another individual who has been associated with the organization in the past is GLEN STOLL, an individual who, “falsely hold[s] himself out to be a ‘lawyer’ and claims to have spent considerable time studying the tax laws” but who “is not a member of or licensed with any state or federal bar.”

And from those sites we get a couple of pictures: 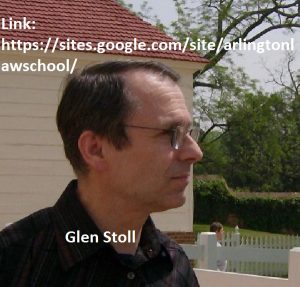 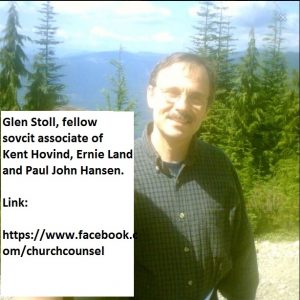 Here’s a couple of more references that tie Stoll to Hansen who is tied to Hovind and Land: 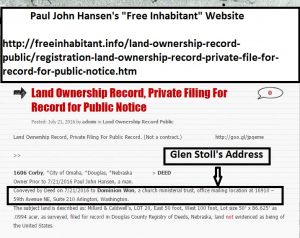 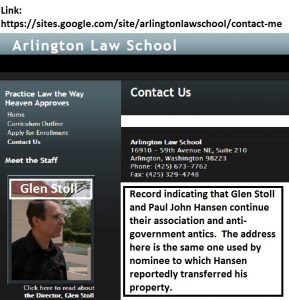 Looks like the above referenced property in Omaha, NB was taken from Hansen and currently belongs to the City.  Seems there was a house on the property that now appears to have been razed; one of Hansen’s slumlord properties. 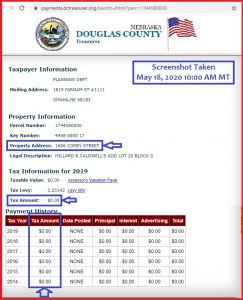 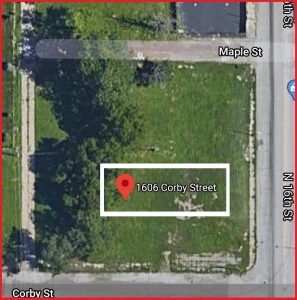 Some pictures of the address in question in Arlington, WA: 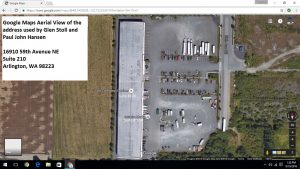 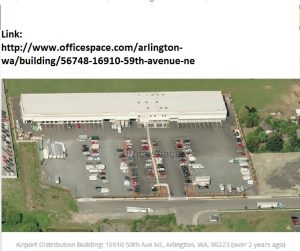 It seems Glen Stoll has been indicted and is scheduled for trial early in 2020.  See Quatloos coverage of the latest at:

Glen’s criminal docket currently has 44 entries and that entry is as follows:

Glen Stoll’s original conditions of release (they have since been modified somewhat):

Transcripts of certain proceedings in the Glen Stoll case have now become available and may be found at the following links, with links indicating the nature of the proceeding transcripted.

Glen Stoll has always played games with regards to names and addresses.  However, in his criminal case it appears he has been compelled to give his legitimate residence where he lives with his wife and as shown in the Google view from 2012 indicated below.  Interesting that Google appears to have captured an image of Glen at that residence. 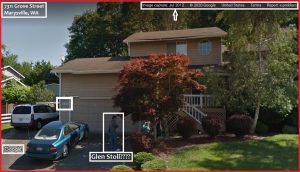 Additional information on residence claimed by Glen Stoll.  Note that the “taxpayer”, Family Defense League, is listed at an address the same as the Arlington Law School mentioned earlier in this article and is an address that has been used by both Glen Stoll and Paul John Hansen.

Glen Stoll continues to walk the streets and has asked for another delay in his criminal trial and it has been, again, rescheduled. 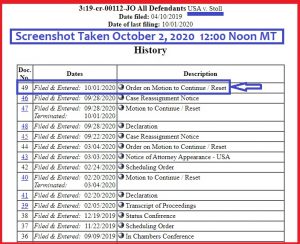 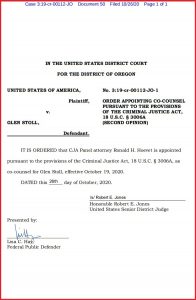 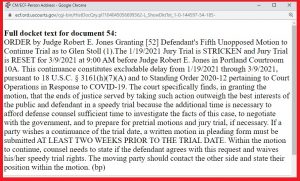 Glen’s clients who previously pled guilty in the related case recently had their sentencing postponed until next month.

Glen Stoll has entered into a plea agreement and will be sentenced in April 2021.  The Bradys, his clients, have obtained another continuance as to their sentencing to April 2021, after Stoll’s sentencing. 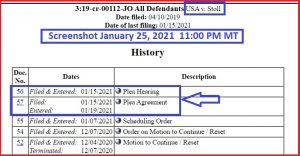 Plea Agreements for Karl & Laurie Brady who will be sentenced in April 2021 after Glen Stoll is sentenced:

Peter J. Reilly publishes this article as a Forbes contributor regarding the Glen Stoll angle to the Hovind story:

The best known Glen Stoll client is Kent Hovind, Doctor Dino. Hovind became prominent in the right wing conspiracy media bubble in 2015. Nearing the end of a long prison sentence for tax related crimes which had involved Stoll-created trusts, he was being tried for activity in relation to property seized as a result of his 2006 conviction. In a phone interview with Hovind in January 2015, I asked him if his association with Glen Stoll might have been part of what created his problems.

Looks like Glen got off with a hand slap!

Probation & Restitution He Will Never Pay!

It is noted that “Document 61” is not available; only the docket entry as noted above.  Maybe it will become available later. 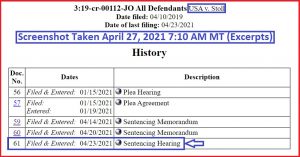 Glen’s clients Karl & Laurie Brady were sentenced today, but I can’t tell what the sentences were.  Other co-defendants got similar slaps on the wrist.

News Article – Probation for Both!

An Oregon City couple who shielded more than $3.8 million in income in a tax evasion case was sentenced Friday to three years of probation.

The plea agreement called for each of them to plead guilty or the deal was off, according to court records.

Karl Brady was one of three owners of Northwest Behavioral Healthcare Inc., a Gladstone-based residential mental health treatment center for adolescents. The trio concealed income from the center for more than a decade, between 2002 and 2015, according to court documents. Brady served as the company’s vice president of accounting.

The three owners began in 2002 to pay a promoter of an illegal tax scheme to help them hide their income from the Internal Revenue Service. They each paid the promoter about $20,000, according to court documents. Each created other companies and accounts and funneled their money into them.

Co-defendants Daniel Mahler, president and chief executive officer of the mental health care provider, and Lyndon Fischer, vice president of marketing, were sentenced to five years of home detention, allowed out only for work with no luxuries allowed.

In 2007, after the IRS contacted Mahler and Fischer about their failure to file federal income tax returns, the Bradys began using a third promoter of another illegal tax scheme. Under this third scheme, the Bradys formed a purported church, related companies and bank accounts to hide income and assets from the IRS, according to a statement of facts signed by the Brady couple and their lawyers.

Laura Brady’s defense lawyer Matthew Schindler on Friday credited the judge’s intervention in the case for pushing the prosecution to go after the man who preyed on the Bradys and others and duped them into following his scam. Schindler said he also was frustrated that the government demanded a felony conviction for his client, who he said simply “went along with her MBA husband on a scheme to engage in tax fraud.”

Schindler claimed the prosecutors watched “this scam artist, this tax promoter, stand up and dupe religious people like the Bradys into believing that they could make a church and avoid paying taxes. That man was running around, And the government knew it for years and years and years. And frankly, if it weren’t for this court, he’d still be running around doing that.”

(The separate “Reasons” document was entered but not made public.) 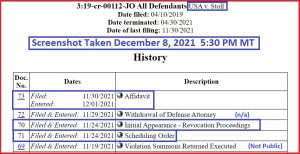 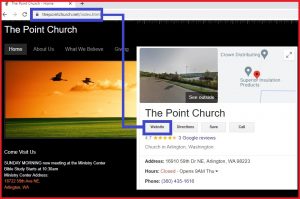 This is from the exhibit noted above filed by Glen Stoll.  It indicates that Glen has not changed and is continuing his criminal activity such as he has for decades. 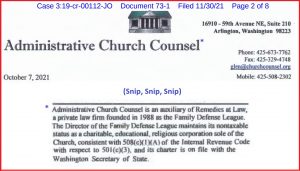 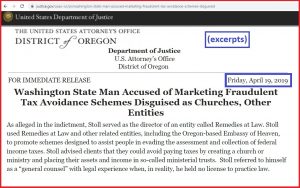 Glen Stoll probation revocation hearing scheduled for later this morning.  Meanwhile, his sentencing hearing is not yet publicly available. 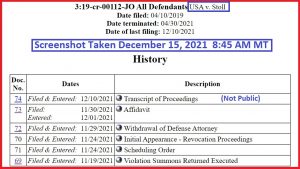 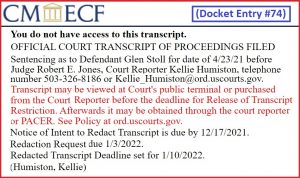 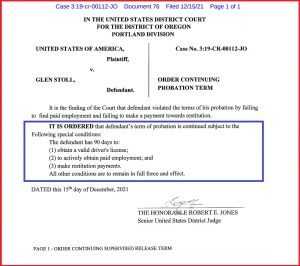 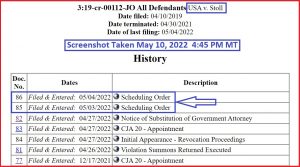 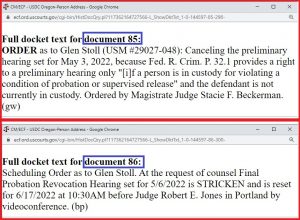