FaceBook does a great disservice to folks when it takes unilateral, hypocritical, disciplinary action against participants while refusing a defense or allowing the accused to face his accusers.

I have a number of enemies that have been lobbying FaceBook for years trying to “get Baty”, with some success from time to time, like today.

I don’t know if Alyssa Carone is the source of the latest FaceBook action against me, but she has a long history of trying to “shut Baty up”, with some successes.

Maybe she has scored another victory.

Maybe not.  Maybe it was some other of my enemies.

In any case, I’ll be spending the next 30 days in FaceBook jail.

If it wasn’t you, Alyssa, tell FaceBook, not me, because I have no way of determining the credibility of any claim you might make about that.

There are some other “persons of interest” that might be responsible; Danielle/C. Clarke Holm, Susan Cobb, Gigi Ray, Meko Haze, etc.

See following for explanation of the above comments. 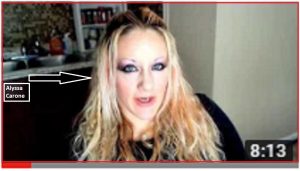 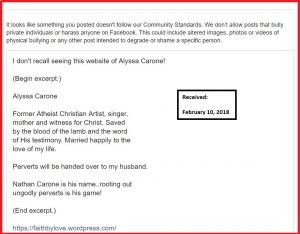