One of my earliest appearances on Brett Dodak’s channel:

And here’s a link to my most recent appearance on the BlogTalk Radio show of Sherrie Saunders, followed by the published description of the show:

In this episode of “United Voices with Sherrie Saunders” Sherrie will update us on the DHR case going on Alabama Robert Baty offers a different perspective to FBI Investigates Baby Kidnapped from couple in Alabama Who Declined Birth Certificate and SSN. Robert’s main perspective is the apparent secret involvement by Kent Hovind‘s man Brady Byrum and their effort to turn the event into a showcase for silliness which may have been the main contributing factor as to why the case was not resolved earlier.

An earlier broadcast by Road to Reason:

Ex-IRS employee Robert Baty challenges preacher Kent Hovind to a debate over his conviction and tax evasion. We tackle the issues of church abuses of the Tax Code and what it will take to rein them in.

Also joining us is Robert Baty, a retired IRS auditor who has made Kent Hovind his main hobby.  Robert will tell us about the shenanigans Hovind has been up to since he got out of jail and how he’s still claiming he did nothing wrong to warrant his near decade in jail.

FYI: The Joseph Edward Interview with Robert Baty on The Baby Holm Case 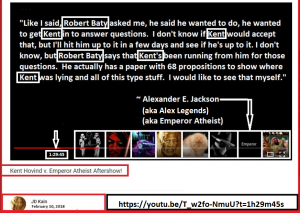