(Analysis will be updated as additional information might be made available.)

Deborah Henderson is an Independent Fundamentalist Baptist of some sort, like Kent Hovind, and has traveled the country with her partner visiting churches and having pictures taken featuring themselves and celebrity Baptist preachers like Steven Anderson and Kent Hovind.

In August of 2016 she visited a relative in Conecuh County, AL where Kent Hovind has his compound.  The relative showed Deborah a copy of a July editorial critical of Kent Hovind and his recent move to Conecuh County.  That was written by Jim Allen and published in his local paper, The Monthly View.

The evidence suggests that Kent Hovind was well aware of the editorial but simply chose to ignore it as is a standard tactic of his regarding such things. However, when Deborah presented it to Kent it may have prompted him to publicly address it, via a YouTube video featuring Conecuh County Commissioner Johnny Andrews, and claim he had not been aware of the editorial before Deborah presented it to him.

Rumors around Conecuh County indicate that Deborah, while visiting Kent and in response to Kent’s video addressing the Jim Allen editorial, was part of a campaign to contact Jim Allen’s advertisers and complain as if they would pull their advertising.

While the story has continued to develop, it appears Kent Hovind is now again trying to ignore the developments and their implications.  Johnny Andrews appears to have become something of a “laughing stock” in the county based on his appearance, literally his appearance, in the Hovind video and he and the Conecuh County Commissioners have been challenged by Jim Allen to act regarding what Jim Allen considers Andrews’ false and/or misleading statements made in the video.

Johnny Andrews is challenged for his seat on the commission in the election scheduled for next month.  This story could have a substantive impact on the outcome.

Deborah Henderson may be making a return visit to Kent Hovind’s compound in Conecuh County within the next couple of months.  I have no idea what activities she may be planning on such a trip.

Deborah and I have had personal, direct discussions regarding these things publicly via the TOPIX website on a discussion page Deborah or her partner set up and privately via FaceBook messaging.  In her last private communication with me, Deborah exhibited an extreme case of Hovind Hypocrisy while consigning me to hell and telling me to “get lost”.

Despite claims to the contrary, Kent Hovind and his people have many, many secrets regarding what is actually going on regarding Kent Hovind and the establishment of his business operations in Conecuh County and related matters.

As indicated elsewhere on this website, I have an outstanding challenge to Kent Hovind for him to come out to me and engage in an open, honest discussion of his legal/tax and related matters and that challenge currently presents 64 propositions for discussion. 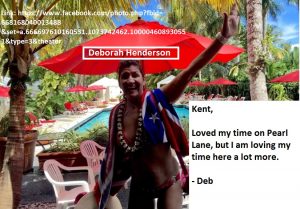 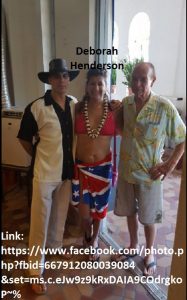 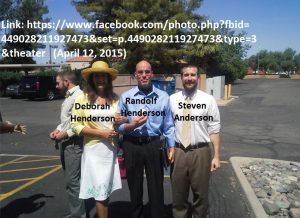 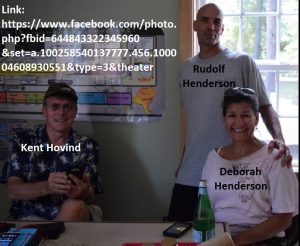 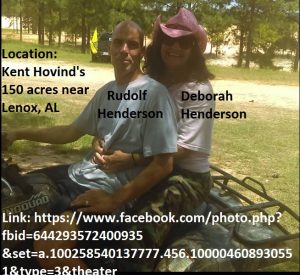 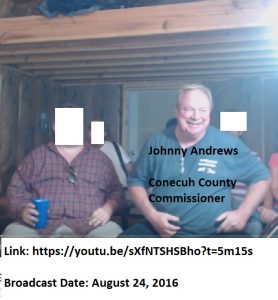 Anybody else wonder about the real story behind the Hendersons and their connections to Ernie Land and his man in Conecuh County, AL – Kent Hovind?

Ever wonder how they manage to seemingly travel around freely to so many interesting and exotic places?

I’m not pushy when it comes to such things. I just never noticed where they ever revealed any “visible means of support”.

I got a hint today! 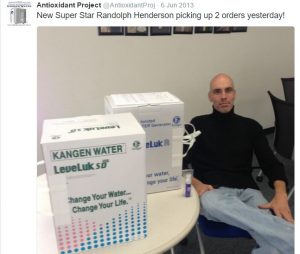 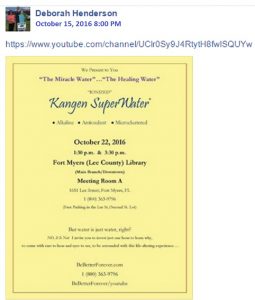 Yesterday I received a cryptic private message from Deborah Henderson via FaceBook messaging that I needed to contact her. 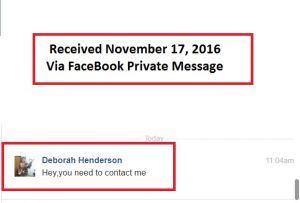 Because I am currently in FaceBook jail, I could not respond to her message and she left no alternative means to contact her.

I reached out to others who might let her know of the situation, and I also left a message on the TOPIX site where we had earlier jousted over Hovind matters.

Today I received a message from a 3rd party with a number to call.

I called and spoke with Deborah Henderson.

In the final analysis, she said she had some important information to pass along but was not going to do so.  This was after I initially withheld the source of the number I got to call and she went into a tirade about how I was a liar (apparently she does not understand the nature and use of memes as in the article above which she was particularly upset about) and such.

(ADDENDUM: After reviewing Deborah’s FaceBook page, I think it reasonable to characterize her concern over the meme as a case of Henderson Hypocrisy.)

Article on this website featuring the Jim Allen July 16, 2016 editorial: 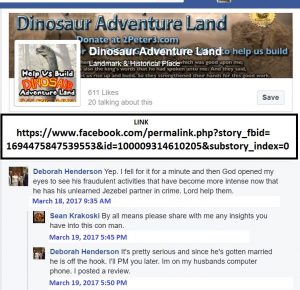 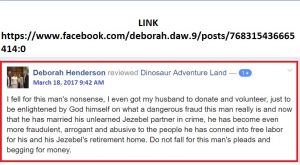 I don’t recall seeing this Deborah Henderson interview before.  It’s from 2017, but the link was just made available to me.

Deborah has broken her YouTube silence and posted a new broadcast critical of Cindi Lincoln and Mary Tocco at:

Deborah was on Brett Keane’s broadcast earlier this week talking about Kent Hovind.  That broadcast is at: