↓
Home→Christian Clarke Holm & Danielle – Come Out, We Can Talk!
A a public service and an aid to understanding the Baby Holm case which has been developing out of Cleburne County, AL, I have established a FaceBook group at:
https://www.facebook.com/groups/1425578747477117/

As explained elsewhere, I became interested in following the case after Ernie Land announced that Kent Hovind’s sovcit expert and promoter of Kent’s false legal narrative video series, Brady Byrum, was meddling in the Holm custody case and was planning to do likewise for others around the country.
Tonight, it appears the Holm people are just not demonstrating that they are aware of my group. Like Hovind and his people, Danielle, in the following referenced post, does not name names or quote anything in particular. I think it is Danielle that is again demonstrating that she, and hers, are the ones with the problems in presenting their false narrative regarding the Baby Holm custody case.
(From Mr. Holm’s public group; “shared” by permission.)
From: Danielle
Date: January 25, 2017
Time: 9:30 PM MT
(excerpts)
Apparently having a newborn infant and wanting nothing but love, bonding and natural methods for our son warrants our pasts to be blasted all over the internet, twisted, turned, used against us while we are mocked at and scorned and our own families are involved!!
We have found our own family, specifically MY sister, My mother and HER friends (this is Danielle) associating and ASSISTING trolls, PAID and UNPAID, friends and family of case workers responsible for destroying our lives, the family of the foster parents, friends of the sister of the case worker responsible for lies to make our visits stop with our infant son so that MY milk dried up after 5 weeks of not bonding with him.
My own mother and my own sister are blasting hateful comments about me, about my husband who my sister has NEVER met, my mother met for about 10 minutes one time and 10 minutes another time, the same week.
Their friends have NEVER met them and they are calling him CRAZY because they are going along with the social workers rants about us.
They have information from documents (mostly fabricated) that ONLY the case workers on our case would know about.
We have been “GAGGED” and their reasoning is so that later when our child is old enough he wont see his “name” which he does NOT HAVE YET and link anything negative to his life!!!
THEN WHY ARE CASE WORKERS BLASTING HIS PARENTS ONLINE THROUGH THEIR FRIENDS, FAMILY and FAMILY OF THE FOSTER PARENTS for him to find later!!????
ALL BECAUSE WE LOVE OUR SON AND ARE FIGHTING FOR HIM and not backing down and LOVING HIM and refusing vaccinations and natural methods for him and living closer to Yahweh!!??
I am hurt.
I am upset.
I am empty without my son, and my own family chooses to not care as they remain in denial of their own lives.
They are blasting the mother and father of their own nephew and grandson.
They are blasting the mother and father of an innocent baby boy when this baby boy’s parents would love him more than they ever could have loved us.
We are in pain and we are broken.
We have a hard time trusting anyone at this point and this is why.
If I cant trust the woman who birthed me out of her womb, how can I trust anyone??
If Christian can’t trust the man who provided his SEED to his mother, who he came from, who can HE trust?
I could not imagine doing this to my own sister, my own mother, aunt, uncle, friend.
NO ONE.
I ESPECIALLY could not imagine doing this to my CHILD who I LITERALLY LOVE in a way that is completely indescribable.
I would do ANYTHING to make him healthy, happy and protected.
Do we have pasts of being lost and hurt?
Have we made mistakes??
YES. DON’T WE ALL!?
Yahweh uses the BROKEN.
We are BROKEN.
Our pain shall set others free.
That is what we hope.
We LOVE all.
We are disappointed in others actions, but we still love.
We forgive, but we still hurt.
Keep beating us down and we will grow closer and closer to YAHWEH!
There is no other way.
————————————————————— 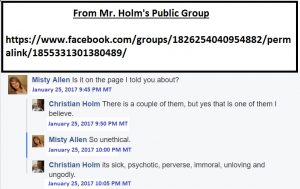