“The Hadza have been living peacefully, happily and sustainably…without vaccines…in the Great Rift Valley of East Africa for at least 100,000 years.”

As of October 24, 2016 at 6:00 PM MT, that statement on Mary Tocco’s FaceBook page remains without explanation, correction, retraction or other consideration by Mary Tocco, and that despite numerous critical comments following the original post which included the above statement.

The earliest critical comment I noticed is dated September 11, 2016 and the most recent dated October 22, 2016.

In separate action on September 9, 2016, Steven Anderson, a celebrity preacher from Arizona, and business associate with Kent Hovind, and critic of Kent Hovind’s marriage to Mary Tocco, referenced the 100,000 years comment in his very public criticisms of the marriage and called into question Mary Tocco’s position on the age of stuff; suggesting it indicated she did not share Kent Hovind’s young-earth theology.

Without some help, we may never know the truth about Mary Tocco’s position on the age of stuff prior to the claim, posted on October 15, 2016, using another’s FaceBook account and an obscure FaceBook group to claim she is a young-earth believer.

“Kent  Hovind Mary Tocco-Hovind here.  For the record, I was referring to another article and was sarcastically stating that people have lived since the beginning of time without vaccinations, referring to the hunzas and other great people who still to this day live very natural.  I believe 100% in biblical truth that the bible is accurate and the earth is approximately 6,000 years old.  I have never ever believe Evolution or anything related to the theory of evolution that th earth is millions and millions of years old this attack is just another example of how people try to shoot the messenger instead of talking about the message.  The person who started this nonsense is just looking for a way to attack.”

It appears Mary Tocco’s alleged comment about “the person who started this…” has reference to Steven Anderson.  Mary, if it was Mary, should not be so cowardly as to not say who she is talking about when she says things like that.

I will accept the proposition that Mary Tocco does, as of now, profess public acceptance Kent Hovind’s young-earth theology.  However, she needs to be more public, personally, if that was her, in making her position clear.  If it wasn’t her, she also need to publicly come out, come clean and openly and honestly address the issue.

The truth about her historical position regarding the age of stuff remains in doubt, in my opinion, and is properly called into question.

Mary Tocco has not, in my opinion, justified the conclusion that she has always held a young-earth position equal to or similar to that of Kent Hovind.

Mary Tocco’s alleged explanation above appears not to have been publicly presented for consideration until someone else offered that possible explanation.  It reinforces the notion that things are not as Kent Hovind would like us to believe, or as Mary Hovind might like us to believe.

As is so often the case in such circumstances, the “coverup” turns out to be worse than the “crime”.

It will be interesting to see the extent to which Mary Tocco publicly espouses the Kent Hovind young-earth theology and what else might be said about her historic position regarding such things. 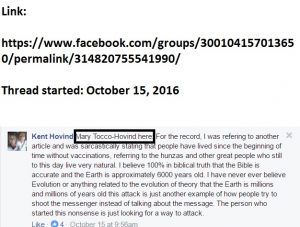