↓
Home→Baby Holm Testimonial From Cleburne County
Cleburne County Testimonial
By Anonymous
January 5, 2017
I’m a resident of Cleburne County for 40+ years.
A saying, really a misquote from Shakespeare’s Hamlet, comes to my mind when I heard about #freebabyholm.
“Me thinks thou doth protest to much, ”
with protest, threat and a spewing of “facts” with no evidence produced other than expecting the general public to believe it because you say its a fact.
Recently the idea that your pulling out of the hat is that almost all of the citizens of Cleburne County residents are supporting you.
That’s huge statement with the actual evidence disproving it.
The numbers of people who are following your group page and the number of people who have signed your petition is very low. When one inspects those number there are very few Cleburne residents or even Alabama residents.
Most are out of state or even out of the country.
This short narrative was designed to shed a light on why I am not one of your supporters and believe there is much more out to the story.
I’m not speaking for anyone other than myself, but here it goes.
The items below definitely don’t include all of my concerns and are not in any particular order.
Problems with the order of events that led up to the protest, i.e. route taken to get to Cheaha, Mobile or Montgomery and the reports of sexual abuse reported weeks after the birth.
Danielle’s response on FB about her mother’s message stated that they had asked to stay with her in her early stage of pregnancy.
This indicates to me the Danielle recognized the need for a stable shelter at that point.
No supporting documentation from family concerning the issue of Christian’s older son.
No support documentation on the rule out schizophrenia.
Symptoms disappearing after the discontinuation of medications do not prove anything.
The constant use of emotionally charged language in every statement.
Then when something about the language is called out, it is greatly reduced and some new word or phrase takes it place i.e. Kidnapping-removal of a child by DHR is not kidnapping; would DHR have picked up Jesus?
Duh they look for other places and took the only thing available.
Mary and Joseph wanted better; Armed men and women entered their room…the police; Nosy nurse who is a mandated reporter who only has to believe that a child is or might be endanger of abuse or neglect unless there is an intervention.
Nurses, teachers, doctors, daycare staff including the cook, and clergy can be charged for failure to report.
Invoking rage over the foster parents taking him out of state for the holidays. The parents have to give permission or the baby would not have been allowed to go. If the didn’t grant permission the baby would have stay with another foster family until they returned.
The inclusion of Native Americans giving birth in tepees and Eskimos (correct term Inuit) in igloos.
Really how often does that happen by choice, and when it does those people are governed by their tribal councils, not the state of Alabama.
And my all time favorite oxymoron…living like Jesus lived in every way including giving up careers, cars and shelter.
Excuse me, but you kept a cell phone and a Facebook account.
Jesus is my adopted brother and I would like to know how to sent him a Friend request on FB.
The details about no vaccines, the SS card, and the birth certificate issues have created an emotionally charged smoke screen and tremendously slowed the process of returning your child.
Who works at hospitals, DHR, the sheriff’s dept. Cheaha, 911?
They are people, who like me, not perfect.
Have mistakes been made, most likely.
But they’ve been made by both sides.
As my Pawpaw would have said,
“Get of your high horse and do what needs to be done.”
Do what you need to do to prove your right after you gotten your child back. The true fight should be done when you got that precious soul back in your arms.
UPDATE January 5, 2017 8:20 PM MT 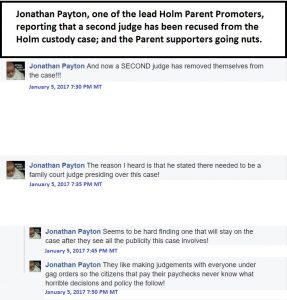