↓
Home→Kent Hovind v. Robert Baty – Raggedy Ann & Andy
PROPOSITION for DISCUSSION
Johnny Gruelle created the Raggedy Ann & Andy dolls to
stand as symbols for the dead children from vaccines.
Kent Hovind: Affirm
Robert Baty: Deny
This issue came up recently in another venue and in the context of the Baby Holm case in Cleburne County, AL.
It appears Kent and his people have rallied behind the misguided cause of Baby Holm’s parents who have been working diligently, with the announced direct involvement of Kent’s sovcit expert Brady Byrum, to prolong the proceedings otherwise intended to reunite the baby with its parents or other responsible family members.
Now it appears Kent has latched on to the Raggedy Ann & Andy claim (see below).
So, it appears only reasonable that this subject be added to the issues Kent is being asked to consider for discussion.
Will he come out, or will he not.
Link to Clear Copy of Graphic:
https://pbs.twimg.com/media/C10q22yUsAEmaJm.jpg:large
Graphic (“shared” with FaceBook & Kent Hovind permission): 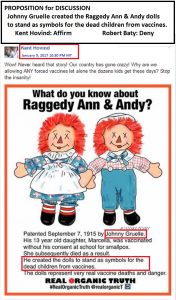 Sherrie Saunders has just posted another promotion for the myth of Raggedy Ann & Andy:

Owe the Irony.. I had a collection of these growing up.. Now I see them here or there..

In case you didn’t know the history of this doll.

~In 1921, Johnny Gruelle’s 8-yr old daughter was vaccinated in school
without her parents’ permission. Between the time she became ill from the
vaccination and her death a few months later, her body was completely
limp, like a rag doll. It was this sick vaccine-injured child that
inspired Gruelle to create the Raggedy Ann doll.