Link to clear copy of image:

Update – Bill’s invitation to which Kent was responding 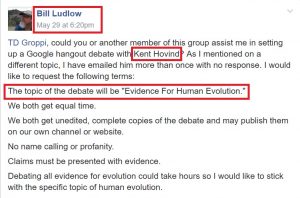 While I was not able to find it when I went back to look, I distinctly recall seeing a subsequent post from Bill Ludlow that was posted after Billy Summers posted his notice withdrawing from Kent Hovind.

As I recall, Bill indicated he may not be willing to debate Kent if Billy’s story about Chris Jones, whom Kent was supporting, claiming he was innocent and set up by the Government for exposing the truth about “Bohemian Grove”.

So, I was wondering if Kent’s later indicated acceptance of Bill’s offer to debate was intended as a tease; hoping Kent could capitalize on Bill’s withdrawal if Bill does withdraw.

Work out the details?

We’ll see how that goes!