The curious cases of Andrea Wood have come to my attention as a result of her association with such as Mitch Smith and Frances Amato and Andrea’s California Family Advocacy organization.

Andrea is a wealthy, California widow with 3 children who were removed from her custody by CPS.  In recent weeks, Andrea has been busy filing federal claims against those involved.  Status of her State case against CPS and the prospects of the children being returned to her are unknown.

Things developed to the point that I thought it appropriate to provide some reference point so I am posting this article. 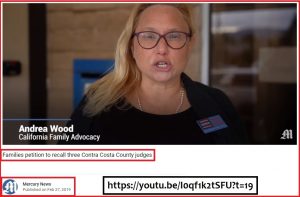 Video of Mitch serving a summons for Andrea:

Another video of Mitch apparently working as Andrea’s process server: 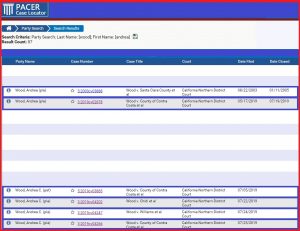 Status Reports on Above Cases

Andrea brought a civil rights action against the Sheriff’s Deputy Hector Luna, et al, for sexual assault in 2002 after she called for assistance in enforcing a restraining order against her husband.  After the call, Andrea later met with Hector and later alleged Hector sexually assaulted her in his car and a motel where she was taken later.

The docket history is confusing, but it appears the case was ultimately dismissed.

Maybe there was a settlement. 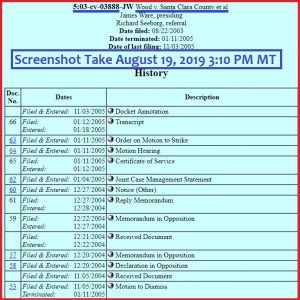 This case was filed based on the removal of Andrea’s children and alleges various civil rights complaints related thereto.  After many filings, including motions to dismiss, Andrea chose to voluntarily dismiss the case.  Later civil rights cases have since been filed as shown later in this article. 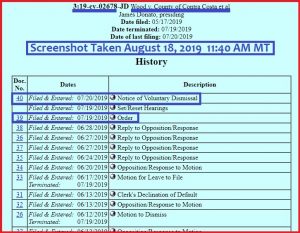 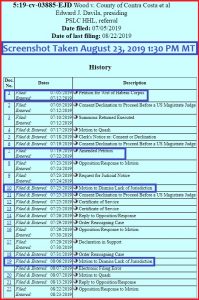 August 23, 2019 – I have updated the docket history shown above.  Below are links to files containing Documents #21 & #22 shown in the above history.

August 29, 2019 – Andrea has filed a motion to change venue as to upcoming court proceedings due to time it would take her to get to and from court.  All things considered, proceedings would seem to be a waste of time since dismissal of the habeas claim seems self-evident.

This also is a suit based on alleged civil rights violation in connection with the removal of Andrea’s children.  Dismissal motions have been filed and are awaiting rulings from the Court.  Dismissal may be anticipated.  As explained later in this article, Andrea has also filed another, more comprehensive, civil rights suit. 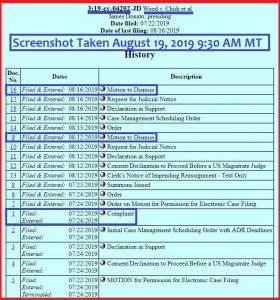 Paper is flying all over the place on the various cases, and this and another below appear now ripe for a ruling on the dismissal motions as evidenced by the following ORDER: 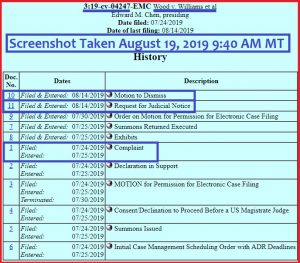 OK, this is Andrea’s big civil rights case for which she is asking $650,000,000.00 in damages, or thereabouts.  It is the most recent and is just getting started, and Andrea has already been moved to file an amended complaint.  This is also the case for which Mitch Smith posted his video showing him allegedly serving a summons on one of the defendants (as noted above).  Andrea has proposed that it is destined for U.S. Supreme Court consideration.  We will see.  I think it more likely to be dismissed and the dismissal sustained on appeal and, if appeal is made to the U.S. Supreme Court, they will decline to review it. 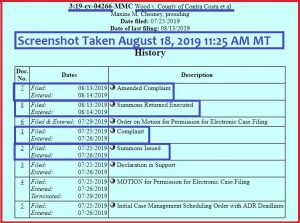 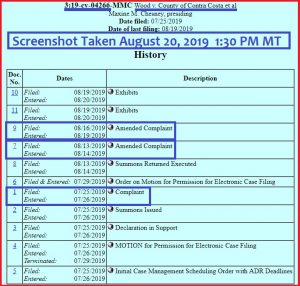 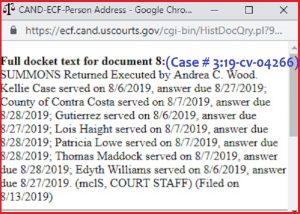 This appears to be the P. Stephen Lamont who served the first 6 summonses mentioned above, before Mitch Smith started doing videos bragging about his efforts to serve summonses (see above references/graphics as to Mitch Smith).  We will have to wait and see what gets reported as to the service of the remaining summonses. 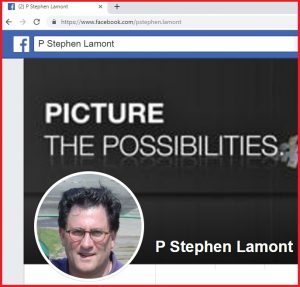 A post P. Stephen Lamont made to Andrea’s advocacy page:

The above post indicates P. Stephen Lamont may be the hotshot, ivy-league, civil rights lawyer that Andrea Wood boasted was advising and/or representing her, though not officially before the Court.

I could not find where P. Stephen Lamont was licensed to practice law in California.

Paper is flying all over the place on the various cases, and this and another below appear now ripe for a ruling on the dismissal motions as evidenced by the following ORDER: 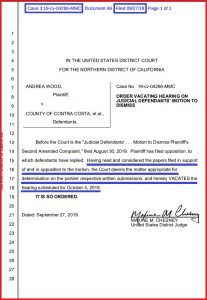 In case # 3:2019-cv-04247, noted above, the motion to dismiss includes a request that Andrea Wood be declared a “vexatious litigant”.  Maybe she will be.  Maybe not.  The request appears reasonable considering her antics, but she may not yet have been vexatious enough to so restricted. 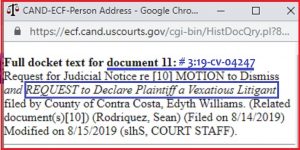 Andrea Wood has indicated that she has a hot-shot, ivy-league civil rights attorney counseling her as well as a team of legal counselors, but she has refused to give the names of any of them.  Michael Haddad of the firm Haddad & Sherwin represented Andrea in the first case noted above where she was seeking damages for a sexual assault she alleged occurred.

Andrea Wood’s deceased ex-husband was Jeremy Packwood.  He died after they were divorced, at age 37, in 2007.  Following is his obituary.

loving father of Taylor and Hayden

soon to be step-father of Connie’s children,

He was a well respected member of the financial community who enjoyed outdoor sports.

Visitation will be Tuesday from 5-7 pm at the mortuary. Contributions in his memory may be made to a trust fund which is being established for his children. Please contact the family for more information. Oakmont Mortuary 925-935-3311

Apparently, with the help of P. Stephen Lamont and Full Colon Mitch Full Colon Smith Period and maybe others of that ilk, Andrea Wood has now filed a document with the Court asking for injunctive action against the State/County to prevent further action in the child custody dispute.

No good reason to think that is anything more than frivolous.  Time will tell.

Following is the latest docket history indicating her filings. 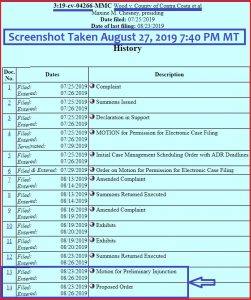 The Epoch Times, possibly being guilty of a little “fake news” reporting at least in this case, posted an article today which features Andrea Wood’s case and, apparently, members of her secret legal dream team (i.e., P. Stephen Lamont and Full Colon Mitch Full Colon Smith Period).  It mentions P. Stephen Lamont as if he is legally representing a client, but I have not been able to confirm he is licensed to practice law in California.

The above article makes clear, in discussing cases, that one of the cases discussed is that of Andrea Wood; for those familiar with the article and Andrea’s case.  Following is just one reference to P. Stephen Lamont, indicating he may be practicing law without a license.

One commentator elsewhere has said about the Epoch Times, where the above referenced article was posted:

“They will print ANYTHING because you pay

to have any story you want printed.”

I also ran across this reference as to the quality of the Epoch Times: 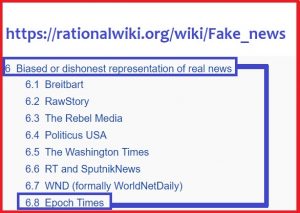 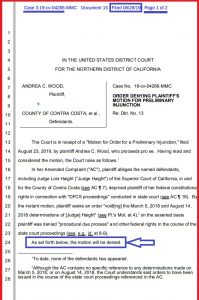 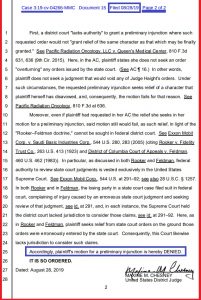 The first motion to dismiss from one of the defendants has come in as well as a request for the Court to determine Andrea a “vexatious litigant”.

Andrea Wood asked the Court to reconsider the denial of her requested injunction against the State.  The Court wasted no time in telling Andrea that “no” means “no”!

I didn’t figure the filings were worth copying and posting here.  The cases appear to be rocking along and my impression is the indications are the cases are going nowhere except for the production of filings which might eventually lead up to dismissal of all or part of the defendants and the cases themselves.

This is a screenshot of an email confirmation from Brad Hertz that his firm, Sutton Law, has been retained by Andrea Wood to file suit against Contra Costa County for election law violation(s). 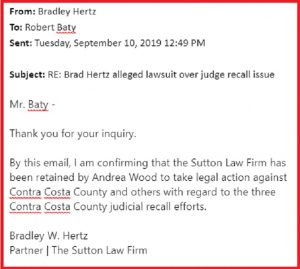 The paper continues to fly in the various and sundry frivolous filings of Andrea Wood.  I just note here one of Andrea’s motions, for sanctions against one of her opposing counsel, that was just posted in one of the cases.

Possibly out of spite for having had her billion dollar suit dismissed, Andrea Wood and “Full Colon Mitch Full Colon Smith Period” claimed they filed a new federal class action suit, though evidence of any actual filing has yet to be found (posts to FaceBook leave some doubt about whether they claim this suit has been filed or not).  Andrea Wood has apparently joined forces with Susan Spell to promote the new suit and are begging for others to agree to be plaintiffs with them. 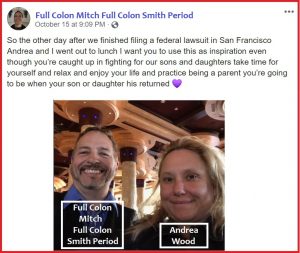 Full Colon Mitch Full Colon Smith Period announced that he and Andrea Wood had filed a RICO case in federal court, and so “she” did, pro se. 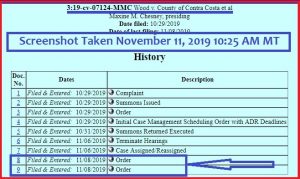 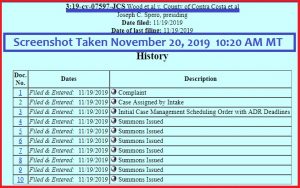 In Andrea’s case #07124 the Court issued a “SHOW CAUSE” order to give Andrea a chance to explain why that case should not be dismissed.  Andrea just filed her 26 page response. 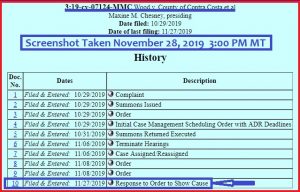 Looks like Andrea has given up trying to pro se litigate her complaints and filed a new Complaint in April 2020, using celebrity lawyer Marc Angelucci to do her bidding.  Alas, Marc seems to have had people that really don’t like him and got himself murdered a few days ago.

There is already over 80 docket entries in that case which appears to be going nowhere, again!

Here is a link to an article about the murder, as penned by Patrick Howley, a fake news reporter of sorts, and it includes a reference to Andrea Wood and her legal antics.

Otherwise, I have not been trying to keep up with all of Andrea’s antics in seeking to draw attention to herself and, ultimately, get a multi-million dollar payoff from the State.

Investigators are reportedly looking into whether there is a connection between the shooting of Marc Angelucci and of a more recent shooting of a judge’s son (who died) and husband (who survived).

Some are connecting dots between the 2 murders!

Seems Andrea has another FaceBook page I have not noticed, at:

She posted recently, using that account, to Full Colon Mitch’s page at: 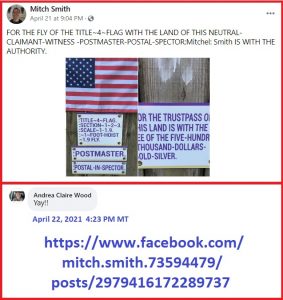