Brady said he’s been at Kent’s Kompound near Lenox, AL for 3 weeks doing what he can, but doesn’t explain any of what that is.

In an earlier performance, Kent pointed to some unnamed person and alleged he was working on showing my positions on Kent’s legal issues are all wrong and that they would effectively “shut Baty up”.

Brady Byrum is a well-known sovcit commodity.  He’s tried to interject himself into Kent’s legal proceedings before and has been rejected.  Kent makes bold claims regarding his legal positions, but never provides any details (i.e., his structuring claim is never shown to have any basis in the law).

Here’s one example of Brady’s work where he made an appearance on Jen Fishburne’s venue where Jen was reporting on Kent’s case shortly after his sentencing in 2007.  Brady’s comments, however, were made August 20, 2015 and were followed by my own (also shown below).

Kent was convicted for failing to withhold money from people’s pay, and all of their “workers” were Americans. Do a google search or an IRS.GOV search for DOMESTIC WITHHOLDING DOCUMENT or DOMESTIC WITHHOLDING INSTRUCTIONS and see how far you get. Withholding is for foreigners. ITS IN THE LAW. No SS-4 Application for Employer Identification Number can yet be located that bears his signature, whereby he would have AGREED to withhold and mail it in. The remaining charges were for NOT REPORTING THEIR OWN CHECK CASHING. Will SOMEBODY PLEASE SHOW ME where to find a CUSTOMER SUSPICIOUS ACTIVITY REPORT? They don’t exist! Maybe the banks did not file one, but neither Jo nor Kent threatened any bank official to NOT FILE ANYTHING. Kent was illicitly and illegally charged and prosecuted and convicted, and I want those false charges overturned.

Kent Hovind, yesterday, named Brady Byrum (see his message above) as his legal mastermind who claims to know the secret words to get Kent’s 2006 conviction overturned and Kent awarded millions in damages for false imprisonment.

Bring it on, Brady, and let’s see what you got.
Kent is afraid to talk about his legal problems in public, with specificity.

So, what do you think you got, Brady?

Come around my place and we can talk about it.

Looks like Brady is still camping out with Kent in Conecuh County, AL: 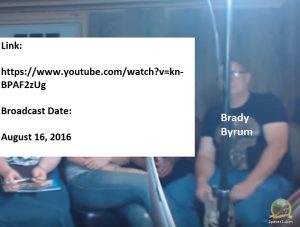 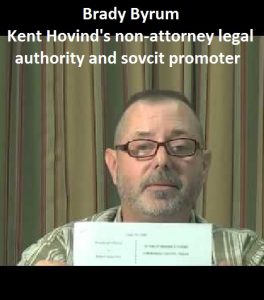 An interview with Brady Byrum:
https://www.youtube.com/watch?v=0a3pK7VdnPY