For some time now, it has been popular amongst people like Kent Hovind, Greg Dixon, Wiley Drake, and their followers to claim that after the Indianapolis Baptist Temple (IBT) property in Indianapolis was seized by the Government, by court order, that one or more of its buildings were bulldozed by the federal government for no good reason and, as they imply, simply out of some kind of spite.

Since they have made such a claim, repeatedly, in support of their political/religious agenda, it must be important.

I have long challenged this claim, but none of them or their followers have come forth to actually try and substantiate the claim apart from their “say so”.

Last night, in his live broadcast, Wiley Drake made the charge again, more than once, and I challenged him on it via phone.  Wiley offered nothing to support his claim apart from some spurious speculation about eye-witnesses.

Wiley, like the others, has been known to make unfounded and spurious claims such as that.

Maybe the time is ripe for Wiley, or his Champion to come out and either prove up their claim or admit that it cannot be done.  I will gladly accept their inability to prove their claim without demanding they admit it is false; though I think it is simply false. 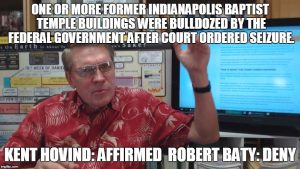 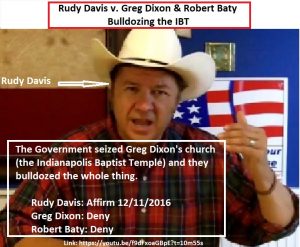 I think Greg Dixon happens to be on my side of this issue! 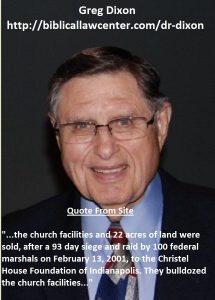 Link to Clear Copy of Image: 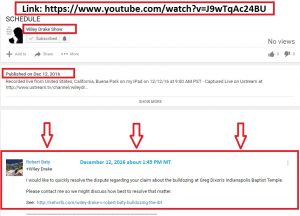 Link to Clear Image of Graphic: 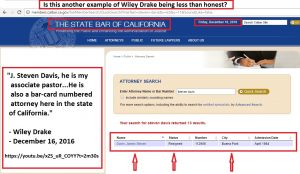 Link to Clear Copy of Graphic: 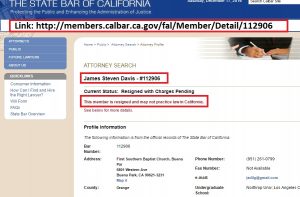 (Begin excerpts from page above.)

A Rancho Cucamonga attorney resigned from the State Bar in June, a week before his arrest by federal authorities on charges of

witness tampering,
failing to file income tax returns
and
trying to carry a loaded handgun on to an airplane.

also was charged with impersonating a federal agent and filing a false statement on a loan application.

His resignation came three months after the Supreme Court suspended his law license March 19 for misconduct that included misappropriation, failing to account for client funds and failing to maintain client funds in trust. On March 30, he was charged with 15 counts of additional misconduct, including making misrepresentations to a court, commingling personal funds in his client trust account, failing to maintain client funds in a trust account or pay out client funds promptly, bouncing checks, improperly entering into a business transaction with a client and committing multiple acts of moral turpitude. Those charges were dismissed when Davis submitted his resignation June 18.

He was indicted by a federal grand jury in Los Angeles for allegedly trying to board a Southwest Airlines flight at Ontario International Airport in June 2002 with a loaded, concealed handgun.

Federal prosecutors said that before boarding the plane, Davis signed a form falsely claiming he had complied with FAA regulations for carrying a gun and was authorized by the U.S. Customs Service to fly armed.

He also allegedly claimed to be an employee of the Department of Homeland Security in April 2003 in order to purchase an airline ticket at a government rate.

The tax evasion charge stemmed from Davis’ alleged failure to pay more than $360,000 in taxes on more than $1 million earned from his law practice between 1999 and 2002.

He allegedly funneled his income into his client trust account and into the bank account of a non-profit corporation he founded.

Prosecutors said he used both accounts to pay his employees’ salaries as well as personal expenses.

The indictment also charged Davis with falsifying an application for a line of credit with a bank in the name of the non-profit, called the California Fire Marshal Officers Association.

After his home and office were searched, Davis allegedly sent threatening letters to individuals who had information about the investigation, warning he would file multi-million dollar lawsuits against them.

Prosecutors said he also threatened to file criminal reports against his foes, whom he called “suspects,” and created a Web site offering a $10,000 reward for their arrest and conviction.

The witness tampering charge is the result of those actions.

The bar case that led to Davis’ suspension stemmed from his representation of a corporate client. On Davis’ advice but without the consent of its board, the company president filed for bankruptcy. When the board learned about the petition, it warned Davis not to act on the company’s behalf and to dismiss the bankruptcy. He responded by threatening to file a federal RICO action against the directors. The petition eventually was dismissed when the court found it was frivolous. Davis and the company president were sanctioned $5,000.

He also deposited an insurance settlement check in his client trust account and kept almost $30,000 as fees, a move a State Bar Court judge characterized as misappropriation.

In the charges that were filed and dismissed after Davis’ resignation, he was accused of misleading the court and trying to receive a second, identical payment of attorneys fees he had already received. He and another attorney received $1 million each for their work on a class action case and as part of a final order, they were entitled to another $675,000. The claim administrator gave half that amount to Davis and the other half to the other attorney.

The bar charged that Davis was dissatisfied with the order splitting class counsel fees, and filed a motion seeking $675,000 for himself. He did not disclose that he already received half that amount, nor did he notify the other lawyer about his motion, although he told the court he had.

All charges were dismissed when Davis resigned from the bar.

(End excerpts from page above.)