Someone using the YouTube ID of “Vanilla Child” made recent appearances in the comments section of Deborah Henderson’s channel in order to run interference for Kent Hovind and make certain accusations against me.

Ultimately, Sheila Duffy claimed to be the person behind the “Vanilla Child” channel and since “coming out” she has been even more vocal in attacking numerous critics of Kent Hovind, including me.

Sheila and I do have a history, one she tends to falsely represent.  As I recall, she, like Kent and so many of his people, simply refuse to deal with substantive issues regarding Kent’s legal problems; beginning with “structuring”.

Kent’s structuring position takes various and sundry but similar forms. Following is a representative claim which Kent has made over the years and in recent days; for debate should Kent or one of his people (i.e., Sheila Duffy) wish to advance that conversation. 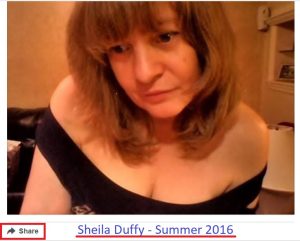 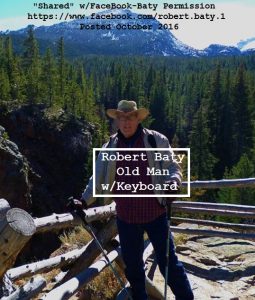 For a little history, here are links to some of the archived history from my YAHOO! group which reports on some of my previous contacts with Sheila Duffy.

Following is information on Sheila’s performance of May 27, 2017 where she attacks Deborah Henderson, me, and others.

(I, Robert Baty, get mentioned by Sheila for the first time around the 4:10 mark in her video.)

From the Description Box for the Video:

Deborah Henderson is claiming to be a Godly woman, yet she is spreading hate campaigns against Dr. Hovind, his wife and all supporters of Dr. Hovind, because she was removed from Dinosaur Adventure Land due to her unstable character.

After battling it out with certain commenters, on several of her videos, I can see Deborah’s true and ugly nature. She is not a woman to trust or believe, as she has also told many lies and has made public claims misidentifying me as some “Sheila Dreaden” whom I am not! Ms. Dreaden, as far as I can tell is simply a subscriber to Dr. Hovind’s YouTube channel and should not be dragged into Deborah’s drama.

Deborah needs professional help and needs to stop slandering without cause.

She is one hot mess and a fabricator of the truth.

Deborah has also befriended the nefarious criminal, Robert Baty, former IRS Agent and Christian Stalker for the sole purpose of throwing her tantrums, spewing wicked lies and slandering a man of God.

Update May 29, 2017 9:50 AM MT – Typically, it now appears Sheila has deleted the following post from her page and other related posts featuring me and Deborah Henderson! 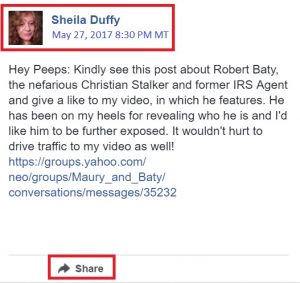 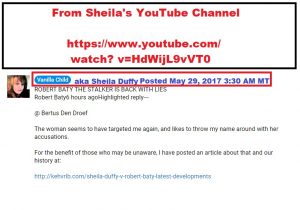 UPDATE May 29, 2017 11:30 AM MT – Looks like Sheila is again up to her old tricks, dodging, weaving, whining, accusing and refusing to come out, come clean, and engage in a substantive discussion of her problems.  I just noticed she posted the following on one of the groups designed to promote Kent Hovind.  She added a couple of comments to that thread referencing this website and my YAHOO! group. 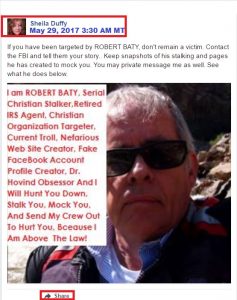 Another Update May 29, 2017 1:25 PM MT – Looks like Sheila is following me around the Internet looking for opportunities to make her threats, false claims, and try to bully and intimidate me while riding Kent’s coattails for some personal publicity.  Looks like she also deleted her post as quickly as I responded to it, or maybe Deborah did.  In any case, it looks like her posting is now gone (at least I can’t see it). 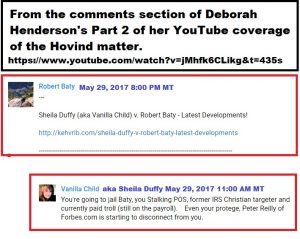 UPDATE May 30, 2017 – Sheila’s really into the moment with her false historical account of things; demonstrating her apparently diminished mental state, and she’s got lots of company to support her, it appears, including Billy Summers (who has since changed his position as indicated in some of the material below)! 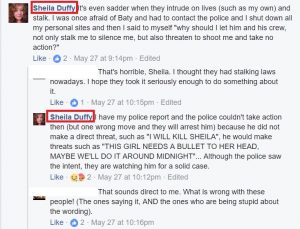 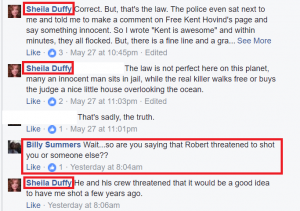 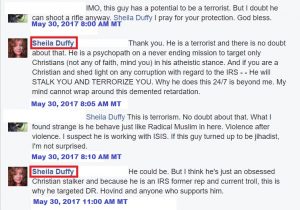 See following article on this site that explains Billy’s decision to remove his Hovind videos from his YouTube channel: 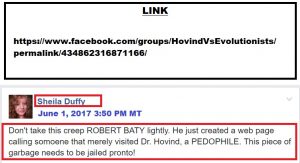 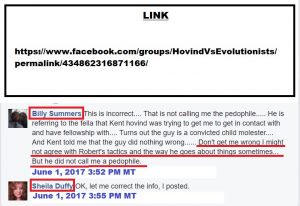 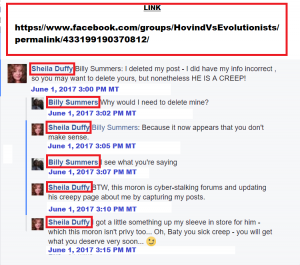 Excerpts from a witness to the history of Sheila Duffy:

As for Sheila Duffy, my memories of her are a little dim.

She lived in New York somewhere close to a railway line.

She has at least one child, a boy whose job was the maintenance of government equipment – jets, I think.  She claimed that he traveled around the world spending a couple of years at a time on airbases.   Consequently, she didn’t see much of him or her grandchildren.

I think there was also a daughter with whom she did not get on.

She had had a violent father or husband and was clearly very lonely.

At one stage she sent me a Facebook message asking me to telephone her and she got very upset when I refused to do so.   But then I was not the only one she tried to emotionally blackmail into telephoning her.

With regard to the fire-arms matter I think it arose when there was some talk amongst her mad chums of violence against us rationalists.

Kent had maintained a serious armory before his arrest.

As you know, my contribution style tends to the humorous and satirical with attempted wit.   Some thread arose relating to firearms but I cannot remember anything of it.

In response, I wrote something to the effect that I could contribute to our defense…a 0.22 airgun which I used to try to deter the rabbits in my garden although they usually just laughed at my futile attempts while they carried on eating the grass twenty yards in front of me.  For ammo, all I could offer were the half-dozen pellets remaining in the tin.   As usual, I was taking the piss.

It was a jokey contribution but it got picked up by #FreeKentHovind and turned into a ludicrous threat by our side of physical violence against Hovind and his supporters (as though anyone gives a damn about any of them).

If it wasn’t for your enjoyable attacks on Kent I would probably take very little interest in Kent’s moronic affairs but, at the hands of Theo, my silly little piece was turned into a threat  equivalent to one by North Korea to attack the US.

It was on this that I suspect the the unstable Duffy bases her complaint.

Perhaps it is a way at getting back at you for my refusing to telephone her for a midnight chat.

She was always putting up comments and then, when things were not going her way, taking them down together with all the responses.

I don’t believe she is quite sane and therefore is not worth engaging with.

I haven’t the time at the moment to go through all the links you have provided but it seems odd that she complains constantly about being “stalked” when not only does she puts herself out there on public forums but also messages people with her private phone number asking them to ring her for long intimate discussions.

Looks like Kent Hovind has become a fan of Sheila Duffy/Vanilla Child! 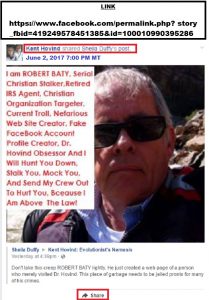 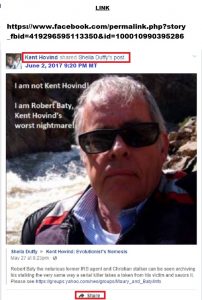