Lee Kenworthy posted a cryptic video the other day which can be found at the following link:

Today Lee posted another video which appears to add his narrative to what is going on with all of that.  Here is the link to Lee’s broadcast today, December 16, 2018:

The story is developing, and this article is intended to break the story as it is developing.  Hopefully, details will be added as time goes by.

Reportedly, there are court proceedings which will be taking place tomorrow regarding the issues between law enforcement, Lee, Heather, et al.
.

It’s funny, though deadly serious, as to how Lee claims that Samantha Brown, his girlfriend, is a federal witness in the murder case of his wife, Shayling.

It wasn’t a murder.  Lee Kenworthy set up the circumstances which, most unfortunately, resulted in the death of his wife, Shayling.
.

My source, which appeared last night, before Lee’s broadcast this morning, advised me of the scheduled Monday legal proceedings and presented a story line much different than the one Lee is presenting in his video today.

That story includes Lee’s and Samantha’s alleged solicitation of group sex (he and Shayling had, reportedly, an open marriage consistent with this report).

My source also claims that Lee and Samantha were involved in what amounts to theft regarding the living arrangements Lee attempts to describe in his video today.

Consistent with what I know about Lee’s and Samantha’s history, my source concludes that Lee and Sam are con artists, grifters and is scared as to what they might be able to do to those involved with him in the present distress.

Stay tuned as this case develops this week.

Watch to see if Shara Cronkite is able to help us out with her dedication to reporting on the Lee Kenworthy case; but don’t hold your breath.

Meanwhile, we are still waiting to find out what, if any, settlement was made in Lee’s federal suit against the Housing Authority in his sexual harassment claim, and what might become of his separate, federal, wrongful death suit which has a number of motions to dismiss from the defendants now pending.

UPDATE: Heather appears to be Heather Christensen, as mentioned by Lee in his video today.  She has a FaceBook page at:

In an earlier broadcast, Lee was claiming Heather as a character witness for him.  Perhaps that relationship, whatever it might have been, has soured!  Here’s the link to that broadcast on Lee’s YouTube channel:

I’m still working on my coverage of Shara’s story.  She sometimes calls herself Freedom Public Press and has used various versions of her names Shara/Sharon Michelle Donato Wolf Austin and has her own child custody story she doesn’t like to talk about while publicly advocating for others with child custody cases that she is more than willing to talk about.  She is also know, affectionately, as Shara Cronkite based on her claim to be the ace reporter for Freedom Public Press, whatever that might turn out to be.

Shara has been advocating for Lee Kenworthy and his false narrative since Memorial Day 2018. 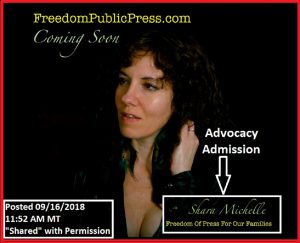 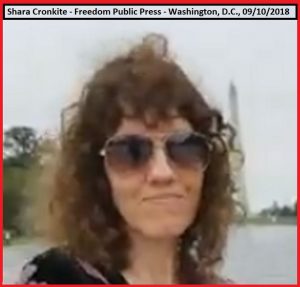 One version follows, not Lee’s or Samantha’s, of the basic events that have led up to where the matter stands today as it, reportedly, heads to court tomorrow.

Due to the nature of the matter, the events cannot presently be verified but, as to me, seems more reasonable than Lee’s and Samantha’s version:

Heather Christensen, a professional psychologist, has a lease on certain real property where she lives and conducts her practice.  She also rented living space in that property to a woman named Callie as well as having rented space to Lee and his girlfriend Samantha.

After Callie refused to become a follower of Lee Kenworthy or have group sex with him and Samantha, Lee tried to force Callie out and take over the lease of the property.

Heather refused to go along with Lee’s scheme and an altercation developed.  Lee used his car to block in Heather’s car and Samantha blocked the doorway so Heather could not leave the house.

Heather had to “fight” her way out of the house and after Callie went back to her room, Samantha called the police to report an assault.

So, there appears to be an underlying criminal charge in addition to protective orders having been obtained by one or more of the “players” against one or more of the other “players” (i.e., it appears that Samantha was able to get a temporary restraining order against Callie which may be the primary subject of tomorrow’s legal proceeding). 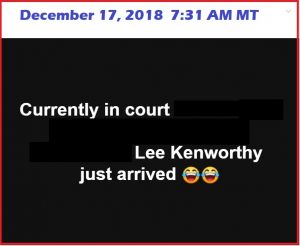 Word from the courthouse is that the case was postponed until January 8, 2019 and that Shara didn’t even show up.

Shara Cronkite has decided to give the story some coverage on her page; so she says.  “Stay tuned!” 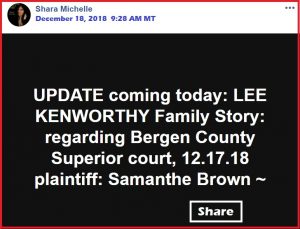 Excerpts from the above thread: 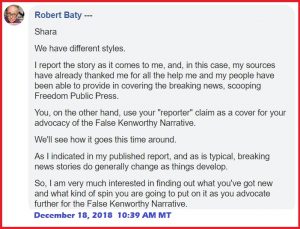 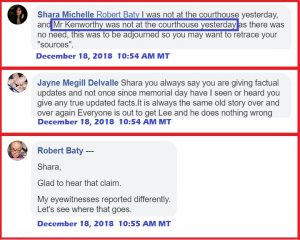 Still working on trying to sort out the details as to who has orders against who and the status and where in the world was Lee Kenworthy yesterday during the proceedings.

Shara did file a “report”, of sorts, just before her self-imposed midnight deadline, Eastern Time, and I have archived it and the following discussion in a thread on one of my FaceBook pages as shown below.  That discussion may continue tomorrow as it is getting late tonight.

Shara and I continued our discussion today, which I have archived at the following link.  Meanwhile, Callie, it is reported, obtained a court order today and returned to the residence to retrieve personal belongings and a cat, with police escort.  Samantha and Lee, of course, at first tried to pretend no one was home, but the event appears to have transpired without any unseemly show by Samantha and/or Lee (police escorts can be helpful).

Information relevant to the restraining order issue can be found at the following links, among others:

About “fraud upon the court”:

My part in the discussion with Shara appears to have come to a reasonable end inasmuch as she has started “hiding” my posts from others; effectively tampering with the evidence and refusing to openly, honestly address the fundamental question regarding Lee Kenworthy’s whereabouts on Monday, December 17, 2018.

The following is a screenshot of my last post to Shara’s page.  Lee Kenworthy and Samantha Brown, whom I also contacted directly, also refused, so far, to give an answer. 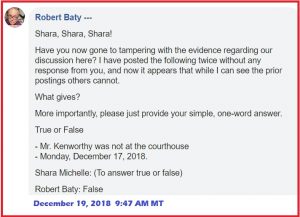 Maybe something to do with custody on his kids!

It has been reported that not long ago Lee lost the Social Security check he had been getting for the kids and his mother, who has the kids, began receiving the check.  That likely really ticked off Lee, and today’s big, secret court proceeding may have something to do with the custody of the kids.  It has been reported that Lee’s mother may be trying to adopt them.  Lee’s decline in income may be a contributing factor in his reported efforts to scam Heather and the landlord out of rent money and control of the property.

Yeah, looks like Lee is all upset about being an unworthy parent and so not being able to get custody of his kids or see his kids for the holidays.

Link to clear copy of above and additional information:

Lee Kenworthy now has his interview on YouTube and if you want to hear him whine about me, Robert Baty, here is the time-marked link to his comments about me: 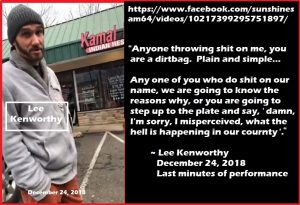 I was advised that Lee was being evicted, and tonight he indicates he has been, but, if my sources are correct, he falsely represents why that might be the case.  And he and Jamie really got into tonight and that “war” appears to continue unabated.

As the controversy over the property evolves, I thought it appropriate to provide some visuals that tie Lee and Heather to the property. 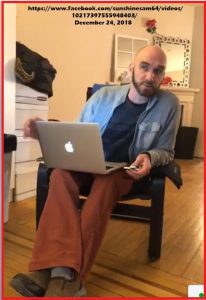 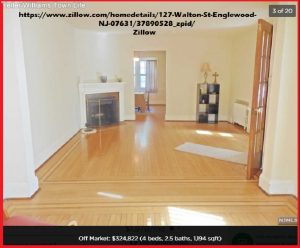 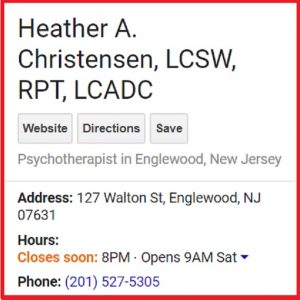 They were all in court today, and reports indicate things did not go so well for Lee Kenworthy and his girlfriend Samantha Brown.

My preliminary report can be found at:

Well, they were all back in court yesterday, but in the end, all was dismissed.  No restraining orders survived; for lack of sufficient evidence to meet the legal standard that would have allowed the Court to make permanent one or more of the temporary orders.

However, the Court made clear that it was convinced that Lee Kenworthy and Samantha Brown were lying and trying to manipulate the system.  The Court also noted that Lee was, in essence, a child and not a 40 year old man he appears to be and that he likely will have continuing problems finding roommates if he doesn’t change his attitude and behavior.

.
The report, the rumors my field agent has been hearing includes the following:
.
The criminal charge(s) Lee Kenworthy and Samantha Brown were wanting prosecuted against Heather Christensen were dismissed after Lee & Samantha refused to show up for Court after being told they must testify.
.
Cross-examination, under oath, in a criminal case. Kind of like “discovery” in a civil case. Lee and Samantha can’t handle it.
.
Lee never paid the February and March 2019 rent on the property that has been an issue in the case.
.
The last tenant is moving out.
.
That will leave Lee and Samantha to cover the rent instead of splitting it, ideally, 4 ways (3 other tenants + Lee & Samantha).
.
Of course, there has been considerable speculation that Lee and Samantha and previously Lee and Shayling are quite skilled at cheating landlords out of rent. Looks like the latest reports indicate they are “doing it again”.

Heather Christensen & Cally Esposito obtained new, temporary restraining orders against Lee Kenworthy as a result of Lee’s antics on FaceBook in attacking and threatening them.

Court proceedings were held on May 20 to consider making the temporary orders permanent.

Lee Kenworthy did not show up.

Cally was given more time to present evidence, and her case was reset for May 29 when Lee will have yet another opportunity to present himself and his position on the matter.