On Connie Reguli by Jacquelyn Weaver

Connie Reguli’s motives also appear to harbor a conflict of interest, particularly as she expresses a continuing bitter personal resentment towards those she had conflicts with in the past. The very sober issues of CPS deserve an analysis which entails respectful fact finding and a deeper understanding of law; something which no grassroots movement of disgruntled name callers can ever engage in. 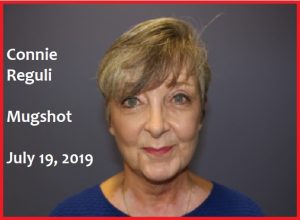 “Reguli was indicted on one count of facilitation of custodial interference, a Class A misdemeanor, and two counts of accessory after the fact, a Class E felony.”

Connie Reguli, a Tennessee lawyer with a specialty in family matters, has been advancing an anti-government, anti-child welfare campaign for years; perhaps growing out of her own personal dissatisfaction with how she was treated when she asked for help regarding her own, personal, foreign adoptions.

In the process of time, she set up what is known as the “Family Forward Project” which, in part, operates the FaceBook group by the same name at the address shown above.

From my observation, that group is primarily set up to promote Connie Reguli’s personal interests in her anti-government, anti-child welfare campaign, while allowing a menagerie of unfortunate (mostly women) to gripe about their experiences and seek help, as if Connie might ride to their rescue.  It doesn’t appear she actually takes on many, if any, cases based on what the women post in her group.

Last year, one of Connie’s paying customers, Wendy Hancock, a long-time client having long-term child custody issues, and a daddy that would pay her legal fees, allegedly took custody of one of her children illegally and “hid out” at Connie’s place for a time while law enforcement was on the hunt to the child.

That’s how Connie Reguli and Wendy Hancock came to be indicted and arrested on July 19, 2019.  Connie has since been all over social media promoting her version of the case and her innocence.

In the meantime, perhaps no coincidence, Connie Reguli appears to have gotten crosswise with her son-in-law, John David Cunningham who is married to one of Connie’s foreign born adopted children, who was a problem child and is a problem adult.

In essence, it appears John and his wife may be having some marital problems and Connie is trying to manipulate the matter so as to obtain custody of the children for herself; in part, accusing John of abusing one or more of the children and using that allegation as a threat to compel John to take the action she wants taken.

That story is just developing on social media as reflected on John David Cunningham’s FaceBook page.

Connie Reguli has been subjected to sanctions by the legal BAR in Tennessee and the courts, and many have wondered how long before the final stroke might be taken to properly remove her from practicing law.

The time may be getting close.

It’s hard to tell at this point which story will have the greatest impact on Connie Reguli’s future; her indictment, or her meddling in her daughter’s and son-in-law’s family matters. 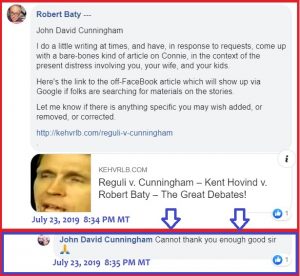 Connie Reguli claims that she bought the house where John David Cunningham and her daughter lived for a number of years.  The ownership and ultimate disposition of that property appears to remain in doubt.

Connie has indicated her daughter and the children are staying with her for the time being.

Connie has indicated that both John David Cunningham and her daughter, his wife, have been arrested for domestic violence and that she funded much of their living expenses while John was wasting away money.

John’s FaceBook presentation suggests he is affluent, but Connie’s representations suggest not so much.

Seems to be quite the mess, with many details beyond public scrutiny, but more and more of it may be seen playing out, for better or worse, in social media.

Just found out that Connie Reguli filed a federal suit on behalf of her daughter and against various government folks.  It was filed in June. 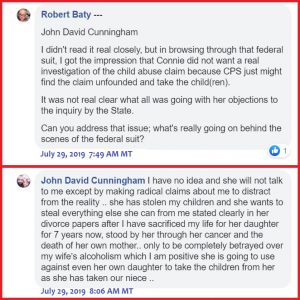 The FaceBook family feud continues via John David Cunningham’s page in the thread at: 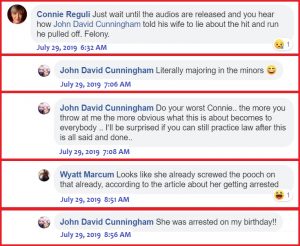 Victoria Cunningham’s federal case against various State actors was DISMISSED in January 2020 and an appeal has been filed.

The above-referenced dismissal was “AFFIRMED” by the appeals court in January of 2021.

We may be hearing more from Elliott. 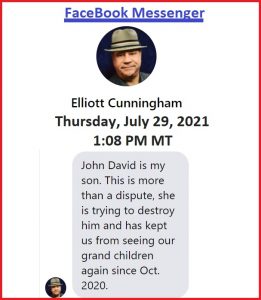 Connie Reguli has posted the following to one of my FaceBook groups at: 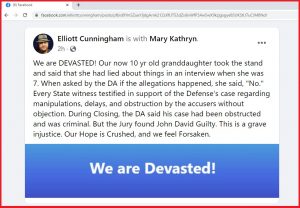